Ifrit is a humanoid, demonic-looking beast. He has a reddish brown complexion with light red hair, and a bulky appearance. He always appears hunchback.

Ifrit's fayth artwork from the Final Fantasy 25th Anniversary Ultimania mentions that the Aeon was originally a 25 year old young man named Edmundo. [1] His fayth uses a Crusader character model, which is also used in other parts of the game for background characters, and for Yaibal for Final Fantasy X-2.

The symbol for Ifrit and Kilika (the one in Ifrit's seal seen in the gallery of this section) is annotated with the kanji for flame (炎, honoo?).

Ifrit is obtained after Tidus completes the Cloister of Trials in the Kilika Temple. 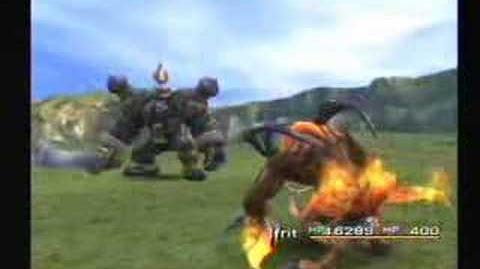 Ifrit's unique ability is Meteor Strike, which conjures a ball of fiery rock and throws it at a single target, penetrating their Protect status. His Overdrive is Hellfire, where he bathes the enemy party in a ball of rising flame and then throws a chunk of earth at them, causing Fire damage. Wakka's fully upgraded World Champion weapon allows Ifrit to break the damage limit and deal 99,999 damage.

Ifrit absorbs Fire damage, and has high Defense, rivaling Bahamut's; however, his Strength and HP are lower. As with all the elemental aeons, Ifrit can be healed by using spells of his own element on himself, meaning Fire spells are an easy way to restore his HP.

Ifrit's victory pose is to hit the ground, then silently roar.

Ifrit's stat growth depends on the number of battles fought and Yuna's stats.

Aeons have "equipment" though it is not visible in-game. Ifrit's weapon initially has Piercing and - (aeon-exclusive trait that protects against instant death and all negative status effects except for Curse and Eject). Once the Wakka's Celestial Weapon (World Champion) is upgraded with at least the crests, the weapon also gains Break Damage Limit. Ifrit's armor has Sensor, Break HP Limit, Break MP Limit and Fire Eater.

Ifrit is fought as a boss on some occasions in the story when fighting against summoners.

In the International, PAL and HD Remaster versions, Dark Ifrit appears after the party escapes Bevelle. He will attack if the party approaches the former entrance to Home in the Bikanel Desert.

Ifrit returns as a boss under Shuyin's control. He is fought inside the Kilika Temple in Chapter 3.

Each Chamber of the Fayth is filled with a version of the "Hymn of the Fayth", each one being sung by the fayth of the aeon within the chamber. Ifrit's fayth is an operatic male with a tenor voice. 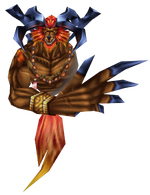 Yuna and Bartz can summon the aeon Ifrit to perform either Meteor Strike or Hellfire. Yuna's attack on the World Map is Ifrit.

Whilst not physically appearing Yuna can summon Ifrit's Glyph to use Meteor Strike.

Ifrit appears as an enemy.

If the player returns to the Kilika Chamber of the Fayth in endgame, they can meet Ifrit's fayth. Ifrit's fayth who explains how Jecht came to Spira: "Sin swam in the sea near Zanarkand. Perhaps the waking dream eased its suffering. Your father touched Sin and became real that night, foundering in the seas of Spira. How sad now, that he is caught in the tragic spiral. He is Sin. He is lost." 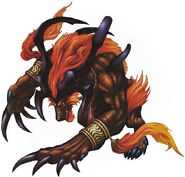 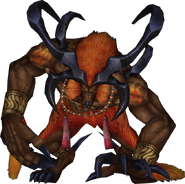 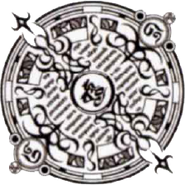 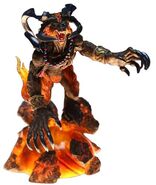