Ifrit is the third available Guardian Force in Final Fantasy VIII. He is Fire-elemental and must be defeated as a boss in the Fire Cavern. He is the first Guardian Force to talk, and expresses surprise and alarm if the player summons Shiva. If the player defeats him without summoning Shiva, he will admit he is impressed with the power of humans.

He learns HP-J and Str-J and Strength boosting support abilities, as well as elemental attack and defense junctions. His unique abilities are Str Bonus, which gives a permanent stat boost upon leveling up; Mad Rush, a command ability that puts the party in Berserk with Haste and Protect; and refine abilities that let the player make Fire magic and ammo from items.

As opposed to the Ifrits from previous installments who were humanoid, the Ifrit in Final Fantasy VIII is a bestial creature covered in brown fur. This is because all Guardian Forces were designed to be rather animalistic, even the human-like GFs like Siren. Ifrit has long sharp horns, an orange mane, gold earrings in his sharp ears, large gold bracers on his wrists, and large claws. His upper body has more mass than his lower body, and he has yellow eyes, a snout, and fangs.

Ifrit is faced as a boss in the depths of the Fire Cavern as part of Squall Leonhart's prerequisites for participating in the upcoming SeeD field exam. Defeating Ifrit acquires him as a Guardian Force. Squall is assisted by his instructor, Quistis Trepe.

The player must choose a time limit for the cavern before entering. The time left on the clock after the battle counts toward the Judgment score of the player's SeeD exam; the less time left, the higher the score. The best score is given at 7 or fewer seconds remaining. The player can idle in the naming screen that follows the battle to let the time run out during it to get maximum score; although the timer does not appear on the naming screen it will keep counting down.

Obtaining Ifrit in the Steam version earns the player the achievement Ifrit.

When summoned, Ifrit uses Hell Fire, a powerful Fire-elemental attack against all enemies. Ifrit's summon animation time is 13 seconds, which, according to the Final Fantasy VIII Ultimania, allows the player to boost its damage to around 180% of normal damage using a regular PlayStation controller.

Abilities learned naturally by Ifrit are listed below:

Ifrit is fought at the end of the Fire Cavern as Squall and Quistis. He is weak against Ice, uses physical attacks, casts Fire, and uses his Jump Punch ability. Summoning Shiva and casting Blizzard against him work well.

Ifrit is a Level 8 GF Card in Triple Triad used for playing the minigame and for turninf into 3 Elem Atks with Quezacotl's Card Mod. It drops from Ifrit the boss. Ifrit's card must be lost to General Caraway in Deling City any time after the assassination mission to make him play the Rinoa card. Ifrit cannot be won back from the General. Instead, the player must challenge Martine behind the mayor's house in Fishermans Horizon.

Ifrit is an auto summon that boosts the summoner's Bravery for 50%. It activates when player receives stage Bravery.

This hot-blooded creature was born of fire. When the half-man, half-beast summon is enraged, it will not be satiated until it drags its foes into a hellish inferno of terror...yet it is tender to a true master.

Ifrit appears as a summon based on his Final Fantasy VIII appearance. He is the most common summon the player gets in battle stage. Alternatively, equipping the Ifrit Magicite item guarantees that Ifrit is always summoned.

Ifrit appears as a boss. 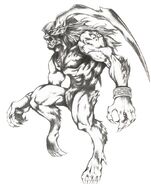 This incarnation is known as "Ifrid" in the Italian translation.