This Esper uses great energy to fry foes in an inferno. Good on foes weak vs. fire.

Ifrit is an esper in Final Fantasy VI who can be acquired as a magicite after being fought as a boss.

Ifrit is a green, humanoid beast-like creature. He has bulging muscles, and two large ram horns, as well as long, purple hair.

Ifrit was one of several espers captured by the Gestahlian Empire during their first raid on the esper world. The captive espers were taken back to the Magitek Research Facility at Vector, and for sixteen years they were experimented on and had their magic drained to develop the Empire's Magitek army.

When the Returners infiltrated the facility to shut it down, they came upon Kefka abusing Ifrit and Shiva, laughing they had been drained of their powers and were useless. Kefka threw the two down a garbage chute, and the Returners dropped down after them. The two attacked when the Returners approached, but after a moment they sensed the presence of Ramuh and stood down. The two explained they had been drained of their powers and tossed in the chute to die, as had been done with many espers before, but there was hope for this still being held captive. The two transformed into magicite and entrusted themselves to the Returners to save their comrades.

Ifrit costs 26 MP to summon and casts Hellfire (Inferno in the SNES and PS translations), which deals unblockable Fire-elemental damage to all enemies. It has a Spell Power of 51. Ifrit's level up bonus is +1 Strength.

Ifrit is not very useful as a summon. His Hellfire attack is weaker than the Fira spell he teaches, with the only benefit being that Ifrit cannot be blocked by Reflect or Runic, but these are not great advantages. His Strength bonus is eclipsed by Bismarck, who is received very shortly after Ifrit and gives a superior +2 Strength bonus.

Ifrit's spells are fairly useful, but he must be weighed against Maduin who teaches all the second tier elemental spells faster than the player can learn them individually, and the player may wish to forego the basic tier-one spells since they can learn the tier-two spells easily. Ifrit is the only esper to teach Drain, but does so at a very low learn rate.

Ifrit is fought as a boss alongside Shiva in the Magitek Research Facility. They switch places frequently, so the player must prepare the right elemental attack. When either of their HP is depleted, the battle will end.

During Kefka's attack on Thamasa, a red palette swap of Ifrit attacks him with powerful fire spells, but is easily slain by Kefka. In the iOS and Steam versions, the esper used the same sprite as Ifrit, with the red-paletted sprite intended for it going unused. 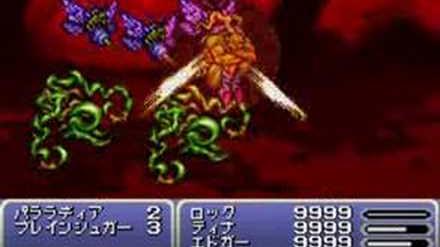