Cid Pollendina: Oh, shut up and help me remodel the Ifrit (Dimensions II) page!
Please expand this article into a full one. The following tasks need to be completed:This request can be discussed on the associated discussion page. Remove this notice upon completion.

Tomatika
Ifrit is an Eidolon and guest party member in Final Fantasy Dimensions II. He is a guardian of King Odin from the world of Eidola. Ifrit has a strong distaste for humans following the events of the Mysidia Crisis and views all of them as corrupt beings. In the mortal realm, he known as the War God or the God of Fire, and the city Ifrita and its mines are named after him.

Similar to the other Eidolons of Eidola, Ifrit has multiple signets available for party members to equip.

Unlike previous depictions, Ifrit's appearance is more humanoid than his recurring bestial appearance commonly featured in the series. Physically, he appears as a bestial human that has red skin and white hair. His outfit consists of black shorts, his body is adorned with golden jewelry, and he wears a white headband.

Ifrit is very hotblooded and stubborn throughout the events of the game. At the start of the game, he has a strong distrust of humans after the Mysidia Crisis and believes that humans will always be corrupt. His hatred for humans is so strong that he goes so far to defy Mootie and attacks Morrow and his party. However, after being bested in battle, Ifrit remains loyal to Mootie and does not dare to defy his orders.

However, by the time of the finale of the Crystal of Time arc and the Eureka arc, Ifrit views Morrow and his friends as allies, but still believes that humans cannot be stronger than eidolons. 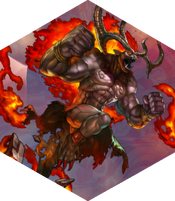 Ifrit joins the party as a guest party member during the events of the finale of the Eureka arc. He and Parai form a two man party during the "Bastardo the Crimson" quest to fight against Bastardo.

During this encounter, Ifrit comes equipped with the final Ifrit signet and the Dark Ifrit signet, allowing him to use Firaga III, Fire Rush III, Firaja, and Dark Hellfire.

In Final Fantasy Legends: Toki no Suishō, his original appearance was in stark contrast to his signet artwork appearance, appearing as a tall man donning a red coat with his horns emerging from his hood.

In the original free-to-play versions, there were three versions of the default Ifrit signet that would become exclusive to Morrow, one version that taught Fire I-V abilities, a second that taught Fira I-III abilities, and a final version that taught Barrage I-III. The Fire-type version of Ifrit could only be obtained as a possible treasure reward in the Eidola Temple and Ifritia Mines battlefields. The Fira and Barrage-type Ifrit signets could only be obtained from the game's summon draw shop.

Jornee's first version of Ifrit was originally a unique version of Ifrit known as Neo Ifrit (イフリート改, Ifurīto Kai?, lit. Ifrit Revised). There were two versions of this signet, a regular signet and a god-tier signet. The regular version was an event exclusive summon that could only be obtained during the "Showdown! Ifrit!" event during the game's time as Final Fantasy Legends: Toki no Suishō. The god-tier version could only be obtained during the "Versus Ifrit" event in Final Fantasy Legends II. Both versions taught the Triple Flame magic attack. In the premium version, the signet was weakened and taught only Fire I-III abilities instead.

Dark Ifrit was originally introduced as a rare signet with Dark Titan in Final Fantasy Legends: Toki no Suishō. It taught the same abilities as in the premium release. Dark Ifrit could only be obtained from the game's summon draw shop.

In addition, all characters could obtain Ifrit's appearance as a costume to equip provided that the player obtained a costume voucher that came with the god-tier Ifrit signet from the summon draw shop. This costume was removed in the premium releases. 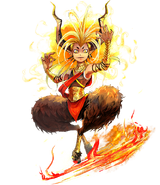 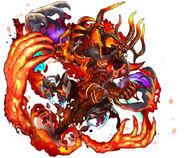 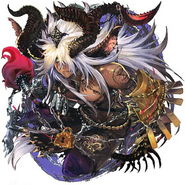