Abilities*(Abilities whose names are not shown are highlighted in italics.)

Abilities*(Abilities whose names are not shown are highlighted in italics.)

Being a Fire-elemental summon, Ifrit is vulnerable to Ice-based attacks. A single Blizzard spell will likely inflict 500 points of damage. However, Ifrit will not just stand and let Zack do the damage; he will occasionally attack, and interrupt Zack's Materia use. The player should rush to Ifrit, then attack it continuously with sword slashes. Ifrit's special attack, Hellfire, is unavoidable.

If Zack kills enough Wutai troops during his Fort Tamblin mission, he will receive a Fire Armlet from Lazard, which can be equipped for the first battle against Ifrit to take less damage from its attacks. 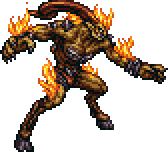 Retrieved from "https://finalfantasy.fandom.com/wiki/Ifrit_(Crisis_Core)?oldid=3239349"
Community content is available under CC-BY-SA unless otherwise noted.