Start a Wiki
watch 05:32
World of Final Fantasy:Ifrit Boss Fight - Faris Story
Do you like this video? 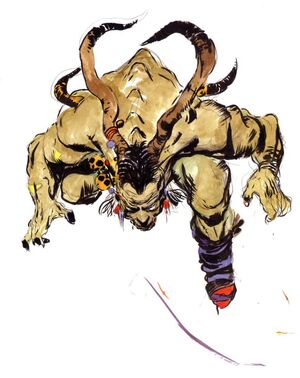 Ifrit (イフリート Ifurīto), also known as Jinn is a fire-elemental Summon which appears in several games in the series. His attack is called Hell Fire, sometimes called Inferno or Flames of Hell, and deals fire-elemental damage to all opponents. He is one of the most frequently appearing Summons and is often a rival to the ice-Summon Shiva.

Like most re-appearing Summons, he changes his appearance in each game, but remains somewhat similar in each game although he curiously appears more and more "beast-like" and less "humanoid" as the series evolves. In general, Ifrit has green-brown skin with long horns and claws, covered by a simple kilt-like covering around his waist.

Ifrit can be summoned by Evokers and Summoners, and is obtained by purchasing the Level 4 Summon Magic spell Heatra.

Ifrit, the Infernal...Spouting flames hot and hungry enough to consume all they touch, he shows his foes no mercy.

Ifrit is automatically obtained when Rydia joins for the second time. He is called Jinn in the SNES release.

Ifrit is a Level 2 summon found in the Library of the Ancients, where he must be fought to be obtained. There is dialogue between him and Shiva if the player managed to find her. According to an NPC on the roof of the library, Ifrit's purpose was to burn books of the Library that had been possessed by monsters.

Ifrit is an Esper whose magic power was completely drained. Along with Shiva, was discarded by Kefka Palazzo in the Magitek Research Facility. He attacks the party when they approach him, but stops when he senses Ramuh's power, and he offers himself up as Magicite.

During his dialogue after the battle, Ifrit claims he and Ramuh were brothers born of different elements, although it is unlikely he meant "brothers" in the literal sense.

During Kefka's attack on Thamasa, a red palette swap of Ifrit attacks him with powerful fire spells, but it is easily slain by Kefka.

His attack is called Hellfire (Inferno in the SNES translation), with a Spell Power of 51, and it is unblockable. He costs 26 MP to summon. He teaches the following spells:

At Level Up he gives a +1 boost to Vigor.

The Ifrit Materia can be found on the Shinra Cargo Ship after defeating Jenova BIRTH. Its attack is called "Hellfire", costs 34 MP to cast and causes fire based damage to the entire enemy party.

Ifrit can be summoned in battle using the appropriate Materia in this game. 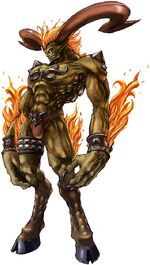 During the beginning of Crisis Core, Ifrit is fought as a boss after having been summoned by Genesis. After this battle a mission will appear called "Rematch with Ifrit". Once defeated, Zack will be given the Ifrit Materia which will add Ifrit to the DMW. His signature attack is still Hell Fire. 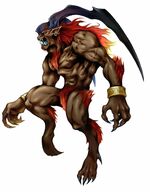 Ifrit is the third Guardian Force available. He is obtained by defeating him in the Fire Cavern before the time limit runs out. He is also somewhat unique in that he talks during the battle, and expresses surprise and alarm if you summon the Guardian Force Shiva during the battle. When summoned, he used the attack called Hell Fire, which is a fire-elemental attack against all enemies.

Abilities learned from Ifrit listed below: 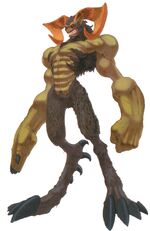 Ifrit is obtained automatically from Doctor Tot at the beginning of Disc 3. It is learned through the Topaz, and only Princess Garnet can summon it.

Black Waltz No. 2 has horns resembling Ifrit's. This may be a reference to his affiliation with the black magic element of fire. 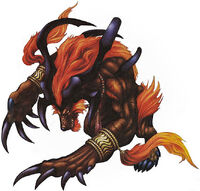 Ifrit is an Aeon that is obtained in Kilika Temple. Its unique ability is called "Meteor Strike", in which he conjures a ball of fiery rock and punches it towards the enemy, which penetrates the "Protect" spell. Ifrit's Overdrive is Hellfire, where he bathes the enemy party in a ball of rising flame and then throws a chunk of earth at them, causing fire damage. Wakka's World Champion weapon allows Ifrit to break the damage limit of 9,999 hit points.

In the International and PAL versions of the game, Ifrit appears as a Dark Aeon after the party escapes from Bevelle and are branded traitors of Yevon. He will attack if you get too close to the former entrance to Home in the Bikanel Desert.

Menu Portrait
Add a photo to this gallery 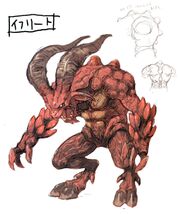 Where walks the Lord of Flame, all is cinder and ash.

Ifrit is the rank 3 Fire Melee summon, and costs 20 affinity points to summon. His normal attack, Burning Strike, deals fire damage to one foe with two successive hits. His special, Hellfire, deals heavy fire damage to all enemies in range, and causes slow.

The player has to fight Ifrit as a boss right at the beginning of the story. He is guarding the treasure of The Glabados Ruins. You battle him again when the party can access The Glabados Ruins on the world map.

Ifrit is set to make a comeback as a summon in Final Fantasy XIII.

Ifrit appears as a demon and performs a fire attack on all enemies in range when summoned. It costs 24 MP to cast, has a speed of 25, and needs 200 JP to learn.

In the PS version, when summoned, the summoner will sometimes say, "King of flames, bear down upon the enemy! Ifrit!"

Ifrit appears as a warrior clad in red armor with bull horns on his helm and large gauntlets and deals fire damage when summoned.

Ifrit appears as an esper in Crystal Defenders W2, and deals damage to all enemies in field.

In the anime, Final Fantasy: Unlimited, Ifrit makes an appearance as a summon. The Soil Charge Triad (Soil is like the colored bullet of a Magun, used to summon creatures) needed to summon Ifrit is:

Followed by saying: "Burn it all! Summoned Creature! Ifrit!"

Followed by saying: "Scorch! I summon you! Ifrit!"

Ifrit appears as a scenery element in the final track, Fantasia.

Ifrit appears as six cards and in the tale Shiva and Ifrit. In the first tale, Ifrit is trying to outdo Shiva to see who is the more powerful. In the second tale, Ifrit is now trying to show Shiva that her Ice is more useful than his fire.

Ifrit is set to appear as one of the giant monsters in Blood of Bahamut.

The World Ends With You

A powerful, top-class Tin Pin bearing the image of a divine beast with dominion over flame. Touch empty space to activate his psych.

Retrieved from "https://finalfantasy.fandom.com/wiki/Ifrit?oldid=545238"
Community content is available under CC-BY-SA unless otherwise noted.