Cid Pollendina: Oh, shut up and help me remodel the Icicle Inn page!
Please expand this article into a full one. The following tasks need to be completed:

Icicle Inn is a town in Final Fantasy VII located in the Snow Fields of the Icicle Area, in an area referred to by the Cetra as the Knowlespole. To the north is the Great Glacier, and to the south is Modeoheim (only appears in Crisis Core -Final Fantasy VII-). It is called Icicle Lodge in the Japanese version.

The town functions as a resort because it snows year round. The constant cold temperatures are not due to the location, which is somewhat polar, but because of the town's proximity to the North Crater, where the Planet uses a large amount of Spirit Energy to try to heal itself.

The snowboarding minigame, which is also playable in Gold Saucer after it reopens in disc 2, was made into a full game of its own with the mobile phone game, Final Fantasy VII: Snowboarding.

For a time, Professor Gast Faremis and Ifalna, a Cetra, lived in the town to hide from Shinra Electric Power Company. Ifalna told Gast about the Cetra and their ways and clears up that Jenova is not a Cetra, but the calamity that destroyed their race. They had a daughter, Aerith, but their time together was cut short when Professor Hojo led a Shinra force to capture them.

In Episode 7 of Before Crisis -Final Fantasy VII-, two SOLDIERs, Essai and Sebastian, are kidnapped by Avalanche and Veld orders two player Turks to find out what happened. The Turks make their way to an Avalanche base where Fuhito is waiting. He orders one of his Ravens, named Tears, after the Turks. The Turks find and rescue the SOLDIERs from capsules where the Ravens are being produced. As the Turks try to leave, Tears attacks. Though the Turks beat him several times, Tears keeps on getting up. Fuhito kills Tears for being too weak and turns his gun on the player Turks, who fight him. They are rescued by the appearance of a third player Turk, who drives a truck through the wall.

The next Episode, President Shinra orders in a SOLDIER 1st Class, Zack Fair, to help destroy the Avalanche base with help from the Turks. During the mission Essai and Sebastian are separated from the player Turk and Zack. Kainyuu, another Raven, captures Essai and Sebastian. Zack and the player Turk rush into the Avalanche base and try to rescue the two and along the way, Zack kills Kainyuu. Essai and Sebastian are too far gone in the transformation into Ravens and must be defeated, and the SOLDIERs die in Zack's arms. Fuhito and all the important Avalanche materials have already been evacuated, so he blows the base up to cover his tracks.

Many years later during Final Fantasy VII, Cloud Strife and his party pass through Icicle Inn while chasing after Sephiroth. The party explores the town, and finds Professor Gast's video research of his work with Ifalna. They find they cannot reach Sephiroth in the North Crater without snowboards. One is found with a boy who broke his leg with it. Just before the party leaves, Elena from the Turks appears, blaming Cloud for Tseng's injuries. Cloud will need to react to Elena's punch and the player will be given the option of

Icicle Inn is located to the west on Gaia's Northern continent. 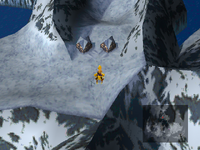 Approaching the woman at the top of the screen for the first time will trigger a scene with Elena and soldiers. After the encounter soldiers will be blocking the southern exits to the village. After snowboarding for the first time, the soldiers disappear allowing the player to backtrack.

The Bar is located within the Inn. The Rest Room in the bar will have different people inside with different dialogues at different times of the game.

Two consoles are by the door. The one on the left controls the sky light, while the other gives the player the option to watch videos. There are 4 videos to choose from, with two being under the "Confidential" choice in the menu.

An old woman lives here, stating that her husband left 20 years ago and should be at the foot of Gaea's Cliff. This references Holzoff whom the party find later. After Meteor is summoned, she instead talks about a doctor on a Southern Island, referencing the Doctor taking care of Cloud in Mideel.

Another woman in the house, who refers to Holzoff's wife as "Grandma" and Holzoff as "master" states that Holzoff was an experienced climber who knows every corner of the Great Glacier. Before Meteorfall, the old woman and other woman have alternative dialogue set to run when the other woman is standing by the fire. The woman advising the old woman not sleep next to the fire, and the old woman's response of her feeling comfortable, although the characters do not need to be spoken to in order.

A man outside the house advises taking the map if spoken to him before going down the mountain. If the player has taken it before speaking to him he will comment on it.

In the room at the top is a room containing two items. The one on the left is a Vaccine, and the one on the right is a Hero Drink. On the wall outside this room is a map. The player can look at the map which brings up the map of the Great Glacier (which can later be viewed in certain areas of the Great Glacier if the player has the item), or they can take the map which removes the map from the wall and adds its to the player's inventory, therefore unviewable from here in the future.

Snowboard is found here. It's given to the player by a young boy whose family just moved into the village. The boy had an accident while learning to snow board and broke his leg, so he can't use the board anymore. He gives it to Cloud and asks him to tell him about anything he does with it.

For the minigame in Gold Saucer see Snow Game.

The player can first play the snowboarding minigame in Icicle Inn, and doing so is mandatory to advance in the storyline. The minigame is later available in Gold Saucer's Wonder Square with new features. Due to the absence of the scoring system, collecting the balloons does nothing in the Icicle Inn course, and it doesn't matter what time the player manages to finish in. It is impossible to collect all balloons during a game. The Icicle Inn course can be thought of as a way for the player to practice their snowboarding skills in order to prepare them for the Wonder Square's arcade version.

Choosing which course (either left or right) to take in an intersection determines the location in where the player arrives at in Great Glacier. The player can either end up in the middle entrance area with a sign, in a forest, in an area with a tree or in a path near the ice cave at the bottom right of the glacier.

The snowboarding game in Icicle Inn cannot be played with Tifa or Cid as party leader, even if they can play the game in Gold Saucer when in Cloud's party. If the player tries to go snowboarding as Tifa or Cid, the person at the back of the village tells them that they can't, because there is now a barrier covering the crater.

"Buried in the Snow" plays in Icicle Inn.

The weapon shop has stairs behind the counter that cannot be accessed in a normal playthrough as the player can't get to the other side of the counter. If one hacks their game to get past the counter, they can find an enlarged Black Materia model at the top of the stairs.[1]. The model serves no purpose in the scene, however, as the object is named "goods" in the scene data, it may have been intended to be used as a representation of the shop's wares that was never fully implemented into the game. The chest in the bottom left corner of the field also has a version where it is open,[2] but it not openable it in the game. 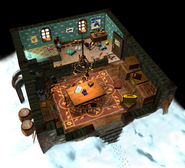 Snowboard.
Add a photo to this gallery