Staff with a divine ice power dwelling inside.

The Ice Staff is Vivi's Ice-elemental staff in Final Fantasy IX. It teaches him the Blizzara spell, which lets him do Ice damage to one or all targets in a group, and Slow, which attempts to slow an enemy down so they act less frequently. The Ice Staff deals Ice damage with Attack, but does not improve Vivi's Ice-casting.

The Ice Staff is stolen from Gizamaluke and found in Cleyra's Trunk. It is found in the Sand Base area

, and the player must get it before filling the area with sand or the treasure gets buried and becomes inaccessible. The Ice Staff can be bought for 980 gil from Treno (when Garnet and Steiner visit there), Cleyra, Lindblum (second storyline visit), Conde Petie, Black Mage Village (before going through the Shimmering Island portal), and Alexandria.

The Ice Staff's damage dealt with a normal Attack is determined as follows everywhere but within Ipsen's Castle:

The Ice Staff is Vivi's Ice-elemental weapon, teaching him the Blizzara spell that remains useful for the whole game, as well as Slow. It is the counterpart to Vivi's other elemental weapons, Flame Staff and Lightning Staff, acquired around the same time, though the Ice Staff is obtained the earliest if the player manages to steal it from Gizamaluke. They remain Vivi's good weapons to use for Burmecia, world map exploration, Cleyra's Trunk, Cleyra bosses, and Alexandria Castle, though the superior Oak Staff can be acquired very early if the player prioritizes Chocobo Hot and Cold. If the player did not steal the Ice Staff from Gizamaluke, the player can still save their money while in Treno and skip buying it there, as the staff can be found in the next dungeon Vivi is heading to: Cleyra's Trunk.

The Blizzara spell from the Ice Staff will be useful in the fight against Sand Golem Cores and the Antlion up in Cleyra. He can have the Magus Hat available at this time, and equip it concurrently with the Ice Staff to empower his Blizzara. Blizzara remains Vivi's best Ice spell for most of the game, until he can procure the Octagon Rod much later.

As staves only offer Attack power and have no effect on Vivi's spellcasting ability, his weapon stats are less relevant to him than what abilities they teach. As the Ice Staff offers no boost to Vivi's Ice-elemental spellcasting, the player can discard it after its abilities have been mastered, as it is not needed for synthesis. 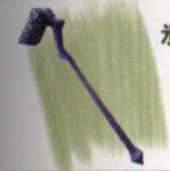