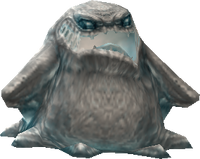 Much like the flame flan, the ice flan is nigh impervious to physical damage. Moreover, it absorbs all ice-based attacks, converting them into restorative energy. The ice flan's behavioral patterns mimic those of its fiery relative, but its elemental properties are opposite, meaning a well placed fire attack will easily melt this monster.

The royal army has trained ice flans (known in Concordia as "blancmanges") to serve as subzero soldiers. In addition, Rubrum researchers have recently reported sightings of a larger variety of ice flan they are calling "asmodeus."