Pamarn Hengpaprom
The Ice Dragon is a water-elemental Eidolon from Final Fantasy Dimensions II. It can be obtained as a signet for Wrieg to equip by completing the "Procuring Bya'ko Beans" side quest in the Middle Ages.

In the original free-to-play versions, the Ice Dragon could only be obtained through the summon draw shop and could be equipped by any party member. However, it taught the Freezing Dust ability instead of the Blizzard Breath ability.

The Ice Dragon's special attack is Northern Cross, which deals moderate water-elemental damage to all enemies, deals a water elemental damage-over-time effect for three turns, and inflicts stop for one turn. Summoning the Ice Dragon costs 2 bars from the Summon Gauge.

The following are the abilities Wrieg can learn from the Ice Dragon: 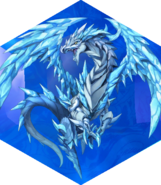 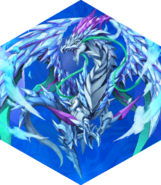 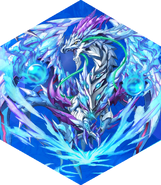 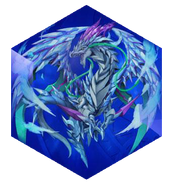