The Ice Cavern is a location just west of the Ceebell River on the Mist Continent in Final Fantasy IX. It connects the lowerworld near the Evil Forest to above the Mist, near Dali.

It is a short dungeon explored early in the game. It is a cavern encased in ice, and many treasures can be found behind ice walls, which Vivi can melt with his Fire spell. The cavern is infested with monsters born from the Mist, and entering the wind currents billowing out of cracks in the ice walls will force the player into an encounter with Wyerds.

After leaving the cavern, one can immediately re-enter it, but the interior cannot be re-entered when Garnet comes to the Dali region with Steiner and Marcus, as the ice starts melting. Both exteriors can still be visited up until the endgame, when a root from the Iifa Tree prevents entry from both sides.

Zidane, Garnet, Vivi, and Steiner travel through the Ice Cavern to reach the top of the Mist Continent to find a way above the Mist. Along the way, Vivi uses his magic to melt the ice, but when the party nears the end of the cavern a spell, puts them to sleep. Zidane wakes up after hearing the sound of a bell and investigates the area. He is confronted by Black Waltz 1, an enhanced black mage who cast the spell, who then fights Zidane after summoning Sealion to assist him.

After defeating him, Zidane wakes up the rest of the party, unaware that Zorn and Thorn are spying on them from an icy upper ledge. At the top of the cave, Zidane informs Garnet that she cannot go wandering around as a princess. Garnet gives herself a new identity, "Dagger", after Zidane's weapon, and he teaches her how to act and speak casually, much to Steiner's dismay.

A cave in the side of a mountain on the Mist Continent; a beautiful place covered in ice that is supposed to take travelers above the Mist.

The first screen in the area yields a tent. Passing through the wind currents in these areas will result in an encounter with Wyerds.

On the second path screen, on the right side, there is a strange wall that Vivi can break with his magic, to reveal an Ether. Then, there is a path behind the steps to a chest that contains a Potion.

The first chest contains a Phoenix Down. Then, staying left, there is a wall that can be destroyed to reveal a path that loops around to another chest containing a Leather Wrist.

In the next area, taking a right at the fork and going up the makeshift bridge will yield a potion from a chest. Then, the bridge can be broken by Vivi's magic to open the path to another chest containing Mage Masher. Taking a left at the next fork provides another wall that can be destroyed for an Elixir.

Vivi can use his fire magic to help free the moogle that is encased in ice, and reveals the ATE "Teach Me, Mogster Lesson 2". The characters will say different things depending on which wall is the first one Vivi melts. If the first thing Vivi melts is the frozen moogle, there is a special conversation for that.

The party enters the area seemingly hit by a blizzard, but then one by one falls asleep. Zidane is then awakened by a noise and leaves to investigate.

Zidane encounters Black Waltz 1, who summons his ice giant Sealion. When defeated, the blizzard disappears and the party wakes up.

The exit from the ice cavern.

Once outside, the party sees a village in the distance that Zidane thinks he has been to before. Before leaving, Zidane tells Garnet she will need a new identity not to be recognized. As Steiner and Zidane argue, Garnet finds a dagger on the floor and asks Zidane what it is called. At this point, the player can rename her; the suggested name will be Dagger. They then work on her speech to make her sound more casual before leaving.

If the player returns here with Garnet when she is on her way to Treno with Steiner and Marcus, or after the main party returns from the Outre Continent, a Dali villager blocks the way back in the cavern at the top of this hill, citing the danger of the ice inside melting and possibly crashing down.

There is a moogle called Mois in the cavern who has a letter to deliver to Gumo in Dali. Later, when the Ice Cavern becomes inaccessible due to the ice melting, Mois moves to the entrance at the cavern's base, preventing the player from entering it (the other entrance is blocked by a villager from Dali, making the cavern's interior completely inaccessible from this point on). After the party returns from Terra and both entrances get blocked off by Iifa Tree roots, Mois moves to the entrance to the Fossil Roo in Qu's Marsh. 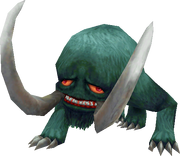 The theme that plays in the Ice Caverns is called "Ice Caverns".

The Ice Cavern was the primary backdrop for the Challenge Event Princess of Alexandria - The Path to Escape. It later appeared in To the Holy Land and Show of Resolve as its own Record. 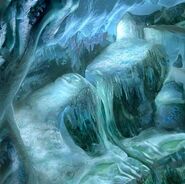 Artwork of a Black Waltz in the Ice Cavern.

Artwork of the exit. 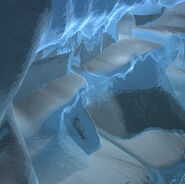 The entrance to the Ice Cavern.

An icicle field inside the Ice Cavern. 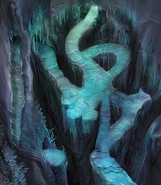 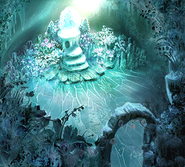 A cave inside the Ice Cavern. 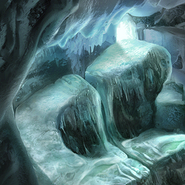 The top of the Ice Cavern's waterfall.

The exit of the Ice Cavern, leading out from the Mist.

A battle background in Ice Cavern, when fighting Black Waltz 1 and Sealion.

Moogle saved from the ice.

A villager blocks the entry.