We have been together for quite some time now. I hope you keep me around for what is yet to come.

Ibara is a summonable vision and an optional playable character in Final Fantasy Brave Exvius. She is a global-original unit and has a CG limit burst.

Ibara is bound to a sacred tree as its tree demon and is often known as a legendary curse. She can be summoned by completing a ritual involving hammering a nail into a straw doll containing a bundle of the invoker's hair for a span of seven days and then making a wish. The ritual was said to invoke Ibara at the cost of the invoker's life so that she can fulfill their wish.

Ibara appears to be a young woman with pale, white skin and long, flowing black hair. She has red eyes and a beauty mark on the left side of her face. She has two white horns protruding from the front of her head. She also has noticable white protrusions by her calves with another more noticeable set coming from her upper arms. She has black roots extending from the lower half of her body. Her body is covered with red marks throughout, extending from her neck to her legs. She wears a golden hairpiece adorned with red ribbons. She wears a black kimono with red, white and violet linings. The kimono is accented with flower and leaf motifs. She wears white socks fastened with red ribbons. She wears high-heeled sandals.

Ibara is a seemingly stoic demon who expresses sympathy for the people who make wishes to her tree. Expressing an understanding of the nuance and complexity of human emotion, she is quick to single out a person's regrets and pinpoint resolutions for it. She upholds a sense of morals and justice that not only extends to her victims but the object of her curse as well. She also possesses a sense of humor, wondering if she should go scare someone's lover on a whim.

Prior to the events of her story, Ibara was a demon who simply dwelled within a tree for centuries. Over time and due to mounting prayers from humans, she became a guardian spirit of the tree and began fulfilling requests that were made of her. The fulfillment of requests over a period of time had gradually increased her curiosity about humans and their natures.

Curse of the Tree Demon[]

Can you hear me? I swear that one day I will kill you. Until then, fear and lament your actions. And when the time comes, I'll slice you into pieces just as I did this doll.

Ibara to the Irritated Man

A young woman in a white kimono makes a wish to the tree hosting Ibara, pinning a straw doll to it with a nail. After proclaiming her wish, the woman is struck dead by lightning and falls to the ground, while Ibara manifests from behind the tree.

An irritated man goes to see an onmyoji about a particular job. Intrigued, the onmyoji visits the man and is told that his wife had passed away and had also performed a curse. The man tells the onmyoji about his trouble with sleeping and the onmyoji announces that he will intend countermeasures. Later at night, the man recalls a conversation he had about a paper doll charm. After remembering what the onmyoji said about the doll, he sees his deceased wife entering his abode, revealing herself to be Ibara. Ibara scoffs at the doll and destroys it, going on further to threaten the irritated man. Due to the severity of her threats, the man falls unconscious and Ibara wonders if she's taken it too far. Noticing a presence outside, Ibara goes to investigate and discovers a fortune teller's shikigami. Ibara deduces that the shikigami was sent to kill the man and concludes that she needs to deal with the fortune teller.

Do not feign ignorance. Neither the doll nor the magic performed was for the sake of stopping me. You had no intention to protect him from the very beginning, did you?

Ibara to the Onmyoji

Ibara confronts the onmyoji at his residence, introducing herself to him as a demon. The onmyoji asks her if she knows what he has done, with Ibara stating that he has had many lovers and had forsaken his wife, eventually throwing her away. She goes on to mention that even after his wife had passed, he didn't shed a tear and he focused on his own safety. Ibara explains that the man's wife sought her assistance, even going as far as invoking a legendary curse. Despite the woman's mounting anger and sorrow, Ibara had also felt the woman's love for her husband and wished to help alleviate her regrets following her passing. The onmyoji is disgusted by Ibara's sentiments, with Ibara engaging him in battle, stating she can't rest until she gives him a taste of her power.

For someone like that to be a famed fortuneteller... Who should really be feared, I wonder, demon, or man?

Following their battle, Ibara uses her limit burst on the onmyoji, revealing himself to be a paper doll charm. Ibara ruminates on the fortune teller's nature, wondering if humans should be more feared than demons. Laughing to herself, she wonders if she should scare another of the irritated man's lovers. Ibara manifests in a lush, green forest, looking at the straw doll pinned to her tree and goes inside the forest clearing. Ayaka arrives at the site and wonders about a mysterious object that was reported about. She sees the straw doll with its nail and takes them to show Sakura.

A scroll of paper imbued with demonic power. Usually the contents of such scrolls can only be read by demons, but this particular one is said to have belonged to a guardian spirit of sorts. Rumor has it that the more scrolls used in unison, the more powerful their effects become.

NV: A demon who appears in legends of old. Ibara dwells within a tree from which she has observed humanity for centuries. As many began praying to the tree, her essence gradually transitioned into a guardian spirit. Now she has no qualms about using her incredible power to help those counting on her.
Entry for Ibara.

Ibara's stats at her highest levels are as follows (with no passive abilities taken into account), along with the maximum amount of stat points that can be increased through pot-enhancements:

Ibara has three abilities that can be enhanced: Sinister Storm, Arashi and Ankoku.

She can equip the following armors: hats, clothes, light armors and robes.

Dwelling within a sacred tree, Ibara has received many visitors over the centuries. This has made her more and more curious about humans, sparking within her a desire to understand them. How will she feel, and what will she do, when someone in true need of her power finally appears?

Demon Who Learned Humanity is a vision card affiliated with Ibara. It features her form manifesting from a tree while being visited by several villagers, some with their dogs. It grants base MAG +35 at Lvl. 1 and base MAG +110 at Lvl. 10. 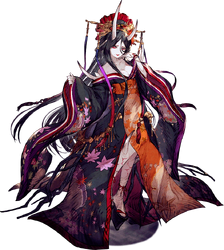 Ibara appears as a summonable vision and optional playable character. She retains her original appearance. She serves as a character representative from Final Fantasy: Brave Exvius.

Phonetically "Ibara" means thorn in Japanese likely alluding to her nature as a Demon born from a tree and the several spiked protrusions on her body. However, Ibara's name is written in Katakana rather than Hiragana so it is a more subtle reference.

Conceptually, Ibara is modelled after the Oni, otherworldly entities from Japanese folklore often compared to Demons, Spirits and Ogres. Although Oni are depicted in different ways, common portrayals show them as hulking, and typically horned humanoids with a love for cruelty and destruction. Oni stereotypes describe them as bruteish and feral, although it is not unheard for them to have supernatural powers.