I Want to Be Your Canary

Edit
April 2016
See also: I Want to Be Your Canary/Script

I'm a big fan of Lord Avon's plays. I have—I mean, I've seen all of them. 'I Want to Be Your Canary' is one of my favorites!

I Want to Be Your Canary (君の小鳥になりたい, Kimi no Kotori ni Naritai?, lit. I Want to Be Your Bird) is a theater play in Final Fantasy IX. It was written by Lord Avon hundreds of years ago, and tells the story of the romance between a noble and a peasant.

Princess Garnet, and her mother, Queen Brahne, love this play, and the Tantalus Theater Troupe from Lindblum arrives every year to perform it on the princess's birthday.

On the day of Garnet's 16th birthday, Tantalus again arrives to Alexandria on their theater ship, the M.S. Prima Vista, but this time under a clandestine mission from Regent Cid Fabool IX to kidnap Garnet to get her to safety from her strangely behaving mother. As preparations for the play are underway, people line up to watch it.

The young black mage, Vivi, has journeyed to Alexandria to see the play, but is refused entry as he did not realize he has a forged ticket that reads, "I Want to Be Your Crow." He meets a youngster named Puck who helps him sneak in to watch the play by walking on the rooftops.

The queen and the princess settle on the Alexandria Castle balcony to watch the play, but Garnet is uncharacteristically gloomy, yet Brahne decides to ignore it and enjoy the play. Unknown to everyone, Garnet has decided to flee Alexandria to Lindblum, and as the play starts she slips away. Baku, the leader of Tantalus dressed as King Leo, welcomes the audience and commences the play.

During a fight scene two Tantalus members, Zidane and Blank, slip into the audience and into the castle itself where they run into Garnet in disguise under a red and white cloak. They follow her, but are spotted by Adelbert Steiner, the captain of the Knights of Pluto, who begins his pursuit. They distract him with oglops Marcus brought with him, and sneak into Prima Vista.

Steiner isn't one to give up so easily, and follows them onto the ship. They end up being taken to the stage while the play is still going, and the script is partially improvised with Garnet taking the role of Cornelia, initially to be played by Ruby, and Steiner "playing" the role of Prince Schneider, though he does not realize that he is in the play. As Garnet as Cornelia pretends to take her life, Steiner falls onto his knees in despair and Queen Brahne comments it is the best version of the play she has ever seen.

Vivi is chased onto the stage because he had come into the show without a ticket, and when he defends himself with a fireball Garnet's cloak catches on fire and she tosses it aside. As the crowd and the queen recognize "Cornelia" as Princess Garnet, Brahne orders her detained. Steiner attacks Tantalus, but Vivi and Garnet aid them, and the Bomb the queen launched into the ship explodes as the Prima Vista takes off into the skies, and crashlands into the Evil Forest outside Alexandria, on the bottom of the Mist Continent.

A year later, presumed to be Garnet's 17th birthday, Tantalus returns to Alexandria to perform I Want to Be Your Canary for her now that she is queen. Garnet is again in a gloomy mood, because she misses Zidane who went missing during their adventures. All of the friends she had met during their travels arrive to watch the play, with Steiner and Beatrix, the general of Alexandrian army, watching with her from the castle balcony.

During the play's climax the actor supposed to be Marcus casts aside his cloak, revealing himself to be a returning Zidane, and Garnet rushes through the crowd to reunite with him on the stage.

During the play at the beginning of the game, Zidane and Blank have a staged sword fight that plays like a minigame with the player having to follow with button combos.

Depending on how well the player does, a number of nobles in the audience are impressed, as well as the queen. Later, when the player is in control of Steiner, they receive a reward if they talk to the queen. Button pressing accuracy alone is not enough to get 100; speedy input is required as well. Failing to input the button in time will count as a missed action, as if the player had input the incorrect button. Perfect button input is not required to impress all 100 nobles, although performances in which Zidane frequently performs the backflip action, or Zidane and Blank clank their swords, seem to provide better noble reactions. Queen Brahne will only be impressed by a perfect performance.

In the mobile/Steam/PS4 versions, getting the perfect score is also easier due to a more lenient timing window. The color cues present with the buttons from the PlayStation controller are absent in the mobile version. In the Steam version, the color cues are absent if the game is played with a keyboard or mouse, but playing the game with an Xbox-compatible controller selected as the input device will re-enable color cues, albeit with the Xbox controller layout (black button with green

If struggling to get the perfect score, the player can cover the entire screen except for the command prompt for better focus. A good way to practice is to focus on precision, and let the speed improve as the player gets more familiar with the minigame. The player can retry as many times as is needed.

Having the audience demand an encore earns the A Round of Applause achievement/trophy in the latest versions.

The player can unlock an extra scene in the ending by having the Hammer in the inventory during the ending sequences. The Hammer can be obtained as the final prize from Queen Stella during the Stellazzio coins sidequest. The extra scene shows an additional part of the I Want to Be Your Canary play where King Leo "executes" Blank.

The player will have to fight a number of battles as part of the "play". The battles on the stage have the SFX command available. The skills from this command are special effects that deal no damage, but Steiner will be annoyed if they are used against him.

A number of themes play during I Want to Be Your Canary: "Tonight" plays when King Leo captures Marcus; "Vamo'alla flamenco" plays during Blank and Zidane's sword fight; "Swords of Fury" (also known as "Feel My Blade") plays during the battle versus King Leo; "Thy Warmth" plays when Zidane, Garnet, and Steiner enter the stage by accident; "Tragic Love" plays when Garnet, as Cornelia, jumps in front of Marcus' blade and dies. During the performance at the end of the game, "I Want to Be Your Canary" plays.

The play, as well as the "acting troupe", Tantalus, is mentioned by dancers of the Lifespring Grotto in the Dawn of Souls and subsequent versions of the original Final Fantasy.

The play alludes to William Shakespeare in numerous ways. The writer of I Want to Be Your Canary is Lord Avon, a reference to Shakespeare's birthplace. The play is similar to King Lear and Romeo and Juliet, with the hero, Marcus, in love with Cornelia, the daughter of his enemy, King Leo. Leo wishes Cornelia to marry Prince Schneider, a man she does not love. Both Cornelia and Marcus end up dying for their love. In the original Japanese version, the king in I Want to Be Your Canary, played by Baku, is King Lear, a direct reference to Shakespeare's character. The name of the play ("I Want to be Your Bird" in Japanese) may be a reference to a line from Romeo and Juliet, in which Romeo says to Juliet, "I would I were thy bird" (Act II, Scene 2) in response to Juliet comparing her love to him to a spoiled child with a pet bird who never lets the bird hop far from his hand.

In an old development memo Hironobu Sakaguchi shared online, the play Tantalus performs at the beginning of the game is a "special play at night when two moons are full once a year". This refers to the twin moons of Gaia. The initial idea for the play also appears to have been a different play altogether, as it is described as: "A theme of a play is 'Moon Light Love Romance' which is very hot now."[1] In the final game, the play is being performed to honor Princess Garnet's birthday.

The excerpts of the dialogue of the original play memo reveal that the play would start with the rescue of a princess confined in "Gulug castle", and that with the "hostage exchange" the "Sassoon country" would be reconstructed.[1] Mount Gulg is a recurring location in the Final Fantasy series, and also appears in the final version of Final Fantasy IX as the Mount Gulug volcano near Esto Gaza. "Sassoon country" refers to Sasune from Final Fantasy III. According to one of the Trivia Mognet Questions in the original Dissidia Final Fantasy, Sasune is the kingdom where Prince Schneider of the play hails from.

During the ending, one of the lines of the play is, "No cloud, no squall shall hinder us". This is an allusion to the protagonists of Final Fantasy VII and Final Fantasy VIII, Cloud Strife and Squall Leonhart. This allusion is only in the English version, the original Japanese being「もちろんだ、たとえ雨が降っても嵐が来ても！, which translates "Of course, not even rain or a storm can stop us!".

In dummied out dialogue, Vivi tells Puck he bought the theater ticket from "a moogle with a hat". Puck says he will hurt the moogle if he ever finds them.[2]

A sign in Lindblum's Theater District mentions I Wish I Were a Chocobo. 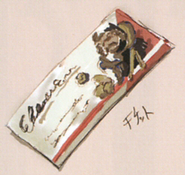 Concept artwork of the sword used during Zidane's and Blank's sword fight.

Stage for I Want to Be Your Canary.

A scene from the play.