All across the Source

Over the course of some one thousand years and three great migratory waves, the Hyur have come to be the most populous of the civilized races in Eorzea. Compared to the others, theirs is an average physique, both in terms of height and build. The Hyur champion personal freedom and liberty, and their espousal of an eclectic variety of languages and traditions is a legacy of their diverse heritage―as is their resulting lack of a unified cultural identity.

Hyur is a race not originally from Eorzea in Final Fantasy XIV, its members having migrated there and brought their technology with them. They resemble the humes of Final Fantasy XI and the Ivalice setting; in fact, on the alternate world the First, they are known as Humes.

A Hyur Midlander represents the player point of view in the intro as well as on the Final Fantasy XIV cover and advertisements. The Hyur takes the role of a warrior in trailers related to the Realm Reborn and appears in the promotional illustration by Yoshitaka Amano for the 25th Anniversary of the Final Fantasy series.

Boasting the largest population in Eorzea, the Hyur came from neighboring continents and islands in three great migratory waves bringing along a sophisticated technology and complex ethos tempered by the breadth of the outside world. They rapidly became a driving force behind cultural progress, and are now attributed with spearheading advances in Eorzean civilization. One of the Hyur's strengths is the staggering variety of languages and social institutions they exhibit, accounting for their conviction in individual freedom, though also resulting in a lack of solidarity and group cohesion.

Two distinct groups now exist among the Hyur: Highlanders, denizens of mountainous areas, and Midlanders, who reside in lower elevations. A third group, hailing from Doma and the Far East, largely resemble Midlanders, some bearing similarities to those of real-life Asian descent.

The Midlander clan comprises over half of the total population of Eorzean Hyur. They have established themselves throughout every city in the realm and lead lives as diverse as their heritage, though they are marginally more common and prominent in Gridania than elsewhere (partly because most or all of the Padjal are born from Midlander families). Trained in letters from infancy, the Midlanders are generally more educated than many of the other races and clans.

The Highlanders have a long tradition of inhabiting Eorzean mountainous regions, particularly Gyr Abania and its proud city-state of Ala Mhigo. Compared to their Midland brethren, the Highlanders are larger in build. Although Highlanders were originally common in Ala Mhigo, the state's conquest by the Garlean Empire has driven them all across Eorzea in great waves of refugees. The largest number of them is found in and around Ul'dah, as the refugees were attracted by tales of Ul'dahn wealth only to learn of the ruthless Dunesfolk business practices. Many are now found on the streets of Ul'dah, huddled outside its walls or in the refugee camp referred to (some would say mockingly) as "Little Ala Mhigo". However, the great Highlander diaspora did not just send them to Ul'dah, and they can be found more or less everywhere across Eorzea.

Originally only male Highlanders were playable, but in A Realm Reborn females became playable characters as well, and generally received a distinct model from the Midlander women (Midlander models having been previously used to represent Highlander women).

Hyuran names follow European-inspired naming conventions, with most Eorzean Midlander names being "Anglic" in origin, while Highlander names have a more Germanic or Scandinavian feel.

A number of minor "Midlander" characters in A Realm Reborn come from Doma on the continent of Othard; their names are based on real-life Japanese naming conventions.

The following table shows the attribute modifiers for Hyurs. These are flat modifiers and do not scale with level, only making a noticeable difference at low levels and quickly becoming negligible as these attributes climb into the hundreds and thousands.

Completing the Adventurer from Another World collaboration quest earns the party Eorzean-themed attires, including the Glamour Prism: Hyur for Prompto. 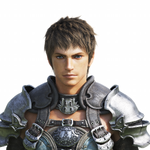 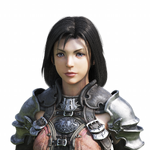 Male and Female CG Midlander busts. The male one is the basis for the CGI Midlander, while the female one is currently unused.

Despite the male CG Midlander's prominence in promotional materials, there is a second detailed CG model of a black-haired female Midlander that has not been used in any other media or promotional material since the game's original launch, and was not featured in the game's original opening cinematic. The only other known high-detail CG model that is otherwise unused is that of the male plainsfolk Lalafell.

As of 2014, Hyur was the most popular player race of Final Fantasy XIV: A Realm Reborn, with 35% of the players playing as one.[1] 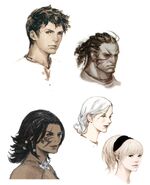 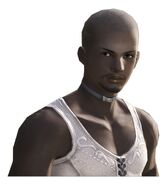 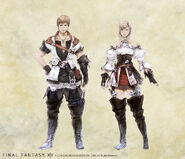