This gunblade uses a semi-automatic pistol, resembling a Beretta rather than a revolver as a handle, and it also has a unique blade. Seifer uses it differently from Squall's gunblades, in a backhand slash rather than a forward one, although this may just be his fighting style and not due to the weapon's design mechanic, and he also uses it with one hand rather than two. Due to a lack of mention in any source material involving gunblades it is unknown whether this is an actual model type or a custom designed model for Seifer's personal use.

Hyperion (ハイペリオン, Haiperion?) is a recurring weapon in the series. Originally appearing as Seifer Almasy's trademark gunblade, it is similar to Squall Leonhart's Revolver, and generally appears whenever the character himself appears.

Hyperion is Seifer's weapon of choice, providing 12 Strength and 255 Hit Rate. The trigger button enhances damage when pressed right when Seifer strikes his enemy, same as how Squall's gunblade works. Hyperion stands apart from Squall's gunblades thanks to its use of a Beretta-style handle instead of Squall's revolvers. Seifer wields the weapon against the player when fought as a boss.

A great sword that can be used for defending as well as attacking. It increases the bearer's maximum HP. Rank: Basic.

Hyperion was introduced in Endwalker as the

The Hyperion is one of Squall's unlockable weapons, and is loosely based on Seifer's weapon in Final Fantasy VIII. It can only be purchased as DLC from the PlayStation Store. Like all other characters' weapons, equipping either of these offers no advantages or disadvantages.

Seifer wields the Hyperion in his character model.

A type of weapon known as a gunblade that hails from a faraway world. According to one story, this blade was used by a sorceress's knight who sought to emulate the hero of a certain film. Even in its world of origin, however, there are few who can use it competently.

Hyperion (FFVIII) is a Great Sword obtained as the Super Trust Master Reward from Seifer. It provides 180 ATK, +50% Accuracy, requires both hands to wield, has a damage range of 100-160%, increases physical evasion by 20%, and increases equipment ATK by 50% and accuracy by 25% when single wielding any weapon.

Hyperion is a gun that can be equipped by Ryuma.

The in-game description for the Hyperion in Final Fantasy VIII notes its resemblance to a Beretta. Beretta is a real world Italian firearms manufacturer best known for its semi-automatic pistols, with the Hyperion resembling the popular Beretta 92. 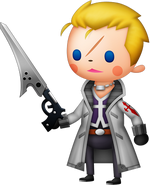 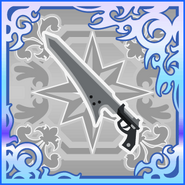 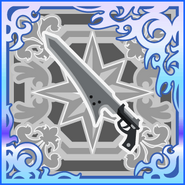 [view · edit · purge]Hyperion was one of the twelve Titans of Ancient Greece, the sons and daughters of Gaia and Ouranos, which were later supplanted by the Olympians. He was the brother of Cronus. He was also the lord of light, and the Titan of the east.