Hydro is a boss in Final Fantasy XII fought at entrance to the Pharos.

Being an undead, kept in this world by sheer force of will long after its body has surrendered to corruption.
While the decay of its eyes has left it blind, it senses the energy of the living and strikes with deadly accuracy.
Though it cannot be known when the creature last breathed, from the state of its yellowed bones, one can only imagine that it has walked in unlife for several thousands of years.

50%(Chance to spawn under this status)
-

Hydro will use Fearga, which causes the party to lose massive amounts of MP. Hydro usually picks one character off until they die. It moves slowly. As Hydro is an undead enemy it is weak to healing magick. It uses Darkra, which deal moderate Dark damage.

The party should Dispel (Final Fantasy XII)dispel Hydro's Haste and then use Quickenings. It is good to have a supply of Phoenix Downs.

Hydro usually picks one character off until they die and as it moves slowly the player can use this for advantage by equipping a bait with a gun and have him become his target, then run around keeping Hydro distracted.

Another strategy is to cast Reflect on the party, then cast the party's strongest healing spells (Curaja is recommended) and reflect them off the characters to hit Hydro.

The player can equip Black Mask that absorbs Dark damage, which is available at Balfonheim Port.

This battle can be made easier by giving someone the Holy Lance or Excalibur and inflicting Berserk on them. Damage can be boosted further by also equipping the White Robes.

Hydro is susceptible to Slow and Oil. Exploiting the Nihopalaoa+Remedy trick will instantaneously inflict them to it. Firaga will now deal massive damage, but casting it would take time because Hydro is prone to use Fearga, and thus greatly reduce the party's MP. The player can equip Turtleshell Choker that lets the player use gil for casting magick rather than MP. Firaga can be boosted further by casting it with the Flame Staff.

The player can also summon an Esper. They are immune to status ailments and don't need MP to use their abilities. 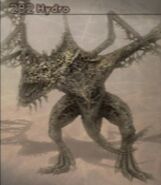 In Tokyo Game Show The Zodiac Age trailer.
Add a photo to this gallery

Retrieved from "https://finalfantasy.fandom.com/wiki/Hydro?oldid=3262844"
Community content is available under CC-BY-SA unless otherwise noted.