The Hybrid Flora has a fairly low Stagger point and a weakness to both Wind and Fire based attacks.

The best way to fight one is by using magic, so a team of Ravagers would be useful.

However, a Medic may also be required, because the Hybrid Flora will deal large amounts of damage when the party first encounters it. It is also possible to counter the Flan's powerful Water-based attacks with Barwater. 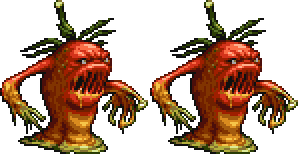 The party fights a Hybrid Flora.

The party fights a Hybrid Flora.
Add a photo to this gallery

Hybrid Flora is a fusion of two plant-like Flan. [view · edit · purge]In biology a hybrid is an offspring of two animals or plants of different breeds, varieties, species, or genera. [view · edit · purge]Flora is the plant life occurring in a particular region or time, generally the naturally occurring or indigenous—native plant life. The corresponding term for animal life is fauna. Sometimes bacteria and fungi are also referred to as flora. "Flora" comes from the Latin name of Flora, the goddess of plants, flowers, and fertility in Roman mythology.

Retrieved from "https://finalfantasy.fandom.com/wiki/Hybrid_Flora?oldid=3293287"
Community content is available under CC-BY-SA unless otherwise noted.