Someone has to play the victory fanfare when we win, right, kupo?

Hurdy in Final Fantasy Tactics A2

Hurdy (Luth in French, Zan in Spanish, and Hardy in Italian) is the joyful moogle of the six moogle siblings. He is the younger brother of Montblanc and Nono, and the older[citation needed] twin brother of Gurdy.

Hurdy, like most members of his race, is of diminutive height. He wears brown small pants, with a dual colored bell-shaped coat, that covers most of his body. The upper part of the coat up to his sleeves are black with some white endings on his arms and neck, with the rest being a sky-blue color with several yellow buttons and what appears to be a pair of small pockets. He has a blue ribbon attached to his neck and his artwork features him with what appears to be the Gigas Pendant. Noteworthy is that he is one of the few moogles to have hair on his head instead of fur and his pom-pom is blue.

Hurdy is one of the few moogles who have hair instead of fur on their head.

Hurdy is a rather friendly and sociable individual, and noteworthy in that he is the only main character to not be seen bickering with the others, which further emphasizes he has no trouble with people. He looks for adventure and to compose music, thinking that traveling will help him create new music. In fact, he joins Clan Gully after listening to Luso's story, and was very excited with the prospect of accompanying him. Despite his skill with music, he confesses he wasn't very good at it at first, and was even thrown food at sometimes; but he kept practicing and getting better, showing his persistence.

According to the side stories Side Stories Hurdy is rather trusting and has been somewhat shy, something he apparently sought to change by traveling alone, which makes him courageous considering he's the youngest of the moogle siblings.

Like most moogles he has a terrible fear of Mooglebanes for their infamy of eating Pom-Poms.

Hurdy runs one of the five Moogling stations in Rabanastre, along with Horne and Sorbet. Along with his siblings, he is grateful to Vaan upon hearing that Yiazmat had been slain.

A wandering moogle minstrel. Younger brother to Montblanc and Nono, and former resident of the far-away city of Rabanastre. Encounters Luso in his travels and promises to compose a song for him.

Hurdy is a Bard who encounters Luso in the middle of his adventure. He is first found in the scene after the story mission Sleepless Nights, performing a song (which is "Sleep of Defeat") in front of some people at a Pub.

Luso said that he liked the song. After the performance he puts up the following story mission Making Music. After completing the mission and making Hurdy an instrument called the Brilliant Theorbo, he joins the clan, determined to compose a song for Luso after listening to his origins, being amazed and believing he will find good inspiration traveling with him.

He constantly looks at quests at the Pub for the clan and often finds quests that directly specify Clan Gully (courtesy of Khamja). Following that battle where they encounter the Neukhia, Hurdy suggests they visit the city of Goug since they can find ancient instruments and other interesting tools while taking the chance at completing Luso's Grimoire.

After arriving at the mines the whole digging expedition turns into chaos when a worker announces the arrival of Mooglebanes which spark the fear of all the moogles in the mine, to the point they even attempt to activate a mecha, only for it to fail, leaving Clan Gully and a extremely scared Hurdy to defeat the menace.

Hurdy later appears and encounters another quest submitted by Khamja, which prompts the Clan to fight Illua and defeat her once and for all. Following her defeat the Clan is transported to Zellea, the Forbidden Land and decide to fight Illua for a final battle. When the rest of the clan is gone Hurdy spots a crying Adelle and asks if he should bring Luso or Cid to help her. She replies she fine and just started to fell sad at the thought that Luso would leave soon after their upcoming battle. She wiped her tears and decided to keep going with Hurdy following.

Encountering Illua for the final time, Hurdy along the rest of the Clan declare his trust on Luso and that no matter what Illua plots, if the rift opens they will close it back. The Clan fights and defeats her, prompting the appearance of the raging Neukhia. Although scared at the sight of the monstrosity, Hurdy holds his ground and regains his courage claiming he has to play the Victory Fanfare after they are done.

At the end of the game, when Luso's grimoire is complete, Hurdy finishes his song and plays it as Luso returns to his world.

After beating the main game if one has the Gigas Pendant, Pin of Order, and Earrings of the Dead, they will find a quest "Wanted: Friends, Kupo". Luso and Hurdy will encounter Montblanc and the two siblings will have a talk. Hurdy is surprised to see Montblanc on Jylland and he says he is on a quest for an accessory he lost. Upon finding that Luso has not only the Gigas Pendants but also two matching accessories (the Pin of Order and the Earrings of the Dead), he finds himself amused at Luso and asks if he's some kind of artifact attractor. Montblanc requests joining the Clan since he wants to spend more time on Jylland. Luso agrees to having Hurdy's older brother in. Hurdy asks if Clan Centurio will be fine without him. Montblanc is confident Bansat will take care of things fine.

Following Luso's departure, Hurdy still remains with the Clan and sings at Pubs as usual. As revealed by the Side Stories, Hurdy, Cid and Adelle enter a Pub after finishing a quest where the barman shows them an inscription courtesy of Luso which reads "Luso Clemens of Clan Gully was here!" (with a drawing of his face) on the low spot of a wall. The Clan members aren't surprised by the stunt. The barman says he could erase it easily if it was ink but Luso's work was carefully done so it wouldn't be as easy to remove and has the Clan take responsibility for the damage. Cid is slightly annoyed that Luso keeps "plaguing him" even after he is gone. Hurdy asks what they are gonna do, and Cid says that normally they'd pay for the damages and be done with it, but Hurdy has second feelings on the matter. Cid agrees and asks the barman if he can allow the inscription there, and that they will pay for the damage nonetheless. The barman reluctantly agrees. The Clan ordered a more pricey meal than usual and they discuss that this may not be the only Pub where they will encounter Luso's handiwork and Hurdy agrees. Cid says they will handle it with Adelle refusing to spend any gil on account of Luso.

Hurdy's job class is a Bard, able to buff other characters with songs and poems. He may also access all other moogle jobs except for Chocobo Knight, just like Montblanc. This is probably because according to the side story, he has a policy against riding a chocobo, but according to in-game, Hurdy and Montblanc's unique sprites prevent them from riding chocobos.

Due to the bard being a Magick-oriented job it is a good idea to have Hurdy level up and learn from the Black Mage and Animist jobs. A Moogle Knight may also be a good idea if one seeks to reinforce his physical endurance (HP and Defense).

Hurdy is a minor supporting character in the Return to Ivalice story, alongside Montblanc.

Hurdy appears as a moogle doll in the quest "The Brothers Kupomazov" at the Moogle Chocobo Carnival.

Hurdy is the fifth in line,
but first in terms of wasting time.
E'er playing, ne'er of work:
nary a duty he doesn't shirk.

Hurdy appears on a Triple Triad card in the version playable via Final Fantasy Portal App.

Hurdy on the back cover of volume 3 of the manga. 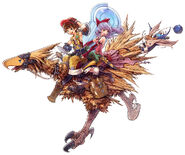 Hurdy riding a chocobo with Luso and Adele. 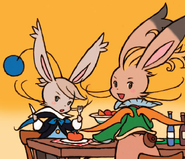