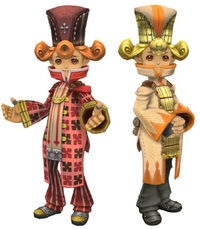 Hurdy (right) and Gurdy (left) are two Clavats from Final Fantasy Crystal Chronicles. They have a mysterious relationship, assumed to be brotherhood.

The Tipa Caravan run into Gurdy arguing with the Caravanners from Marr's Pass. Displeased by his company and believing him to be insane, they abandon him. The Tipa Caravan offers him a ride to the next town. As thanks, he recites a verse from a poem.

Lightning brings the cactus pain, Now it all begins again.

Later on they run into him again, this time arguing with the Caravanners from Plains of Fum. It seems they had loaned him money that he could not pay back. He asks the Tipa Caravan for a loan of 1000 gil (which he never repays). He shares another verse from a poem.

Of crumbled inn few reminisce, Its faulty beams will not be missed.

Later on he travels with the Shella Caravan and swindles them with a loaf of bread. He once again shares another verse from a poem.

Lonely mushroom bursts to flame, In the land that quicksands claim.

Soon after Gurdy travels with the Leuda Caravan and talks with the Tipa Caravanners, revealing he has a brother he never knew and that he cannot remember his past and makes up lies to fill the emptiness. As he turns to leave, the Tipa Caravanners see a vision of Hurdy and the Black Knight and hear them as they lose against Raem. Raem taunts them both, telling them they're not strong enough. As the vision ends, he recites a new couplet.

Three rocks await the winter's kiss, one by one they receive their bliss.

The Tipa Caravan find Gurdy being taken hostage by the Striped Brigands. Gurdy is in no real danger as this was planned out by him and the bandits to gain gil. The Tipa Caravan can pay up, give them nothing, or give them a Striped Apple. They accept the apple, and Gurdy is disappointed to know his life is only worth a Striped Apple. He shares the full verse of the poem:

Hurdy is a traveling preacher who can be met in all towns, except Tipa at random times. He talks of how memories are an important thing that should be preserved, and wishes travelers can one day go from place to place without the hindrance of miasma. It is rumored he has traveled with the feared Black Knight. When Sol Racht questions Hurdy about his relationship with the Black Knight, Hurdy can't recall ever doing such a thing. While true, Sol believes he is lying to avoid association with the Black Knight.

When the Tipa Caravan are about to fight Raem, Lady Mio confronts them and speaks of the last people who tried to defeat Raem before having their memories taken away. It turns out Hurdy had hired the Black Knight to help him rid the world of the miasma.

Clues are left to connect the two not as brothers, but the same person. The couplets Gurdy had written down are clues to finding the Unknown Element needed to pass the Miasma Stream to get to Mount Vellenge. Roland, the village elder from Tipa, will mention a scholar from Tipa who hired the Black Knight for protection on his journey to rid the world of miasma. He disappeared after sending one last letter from Mag Mell. The scholar recites poems referring to Lynari Desert, where the Unknown Element was hidden.

Before the final battle, Lady Mio mentions Hurdy had made it here with somebody named Leon, but both had their memories devoured by Raem. Leon is the Black Knight and Hurdy was the scholar from Tipa who disappeared. After losing his memories he believed himself to be Gurdy, and would recite the poem that clued the Caravan from Tipa in on how to find the Unknown Element to reach Raem. This is confirmed when Gurdy walks behind a tree and reappearing at the other end as Hurdy. This, along with Hurdy appearing multiple times throughout the game, as well as Gurdy's own mentions of finding his brother's clothes, suggests that he developed something of a split personality as a result of being fed on by Raem.

They may be named after the song "Hurdy Gurdy Man" by Donovan or the hurdy-gurdy instrument.

Gurdy News Corp, the corporation responsible for the UMA News in Final Fantasy Crystal Chronicles: The Crystal Bearers, may be a reference to this character.