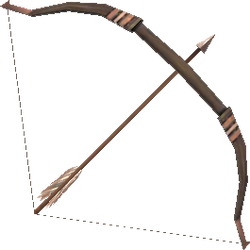 Another bow might be sufficient to claim a hare, or wound a hart, but is it good enough to split a hair, or pierce a heart?

The Hunting Bow (ハンティングボウ, Hantingu Bō?), also known as Hunt Bow, Hunter's Bow, or Hunting Crossbow, is a recurring bow and crossbow in the series. It is often a mid-ranked bow with decent attack and good range.

While not appearing physically or having any statistics inside the data, there is a text string of Hunting Bow suggesting that at one point during development that this weapon was planned to appear in the 3D remake as a bow.

The Hunting Crossbow provides 64 Attack and 7% critical rate, and can be bought at Balfonheim Port for 12,500 gil. Crossbows are the fastest ranged weapons at 2.3s charge and 1.4s action.

In the Zodiac versions, it now provides 70 Attack, 5 Evade, 24 CT, 7% critical rate, and requires the Crossbows 3 license for 60 LP. It can be bought from Mt Bur-Omisace and Mosphoran Highwaste for 9,500 gil, found as a treasure in Paramina Rift (Silverflow's End) and Stilshrine of Miriam (Walk of Reason), stolen from Tarasque (3% chance), a reward for the Feral Retriever hunt, the Conversations with Ktjn sidequest, or from the bazaar for 11,220 gil after selling Spiral Incisor x3, Silver Liquid x3, and Dark Crystal x3. It can be equipped by the Time Battlemage.

The Hunting Bow is the second-strongest crossbow, bested by the Gastrophetes. It provides 6 Attack and 5% Weapon Defense, and can be bought at an Outfitter for 8,000 gil from Chapter 3 onwards, poached from Steelhawk, or found via Move-Find in Orbonne Monastery.

The Hunting Bow is a mid-ranked great bow that provides 32 Attack and 5 Range, and can only be used by the Hunter, Sniper, and Assassin classes. It teaches Hunting to Hunters for 250 AP and Wallet Shot to Snipers for 350 AP. It must be obtained in the Bazaar through the Greatbows D.

Hunter's Bow is a weapon for Trey. In the PSP version, it can be bought from the SPP Post after bringing Trey in multiplayer once. It costs 1600 SPP or and sells for 800 gil.

In the HD version, it can be bought from the SPP Post after defeating 30 enemies with Trey. It costs 200 SPP and sells for 100 gil.

The bow every expert archer has used. Easily skewers even hard-to-reach striped apples.

The Hunter's Bow is a weapon for the Selkie that provides 69 Attack and can be obtained through the Master's Weapon scroll.

This gallery is incomplete and requires Final Fantasy XII and Final Fantasy Crystal Chronicles: Ring of Fates added. You can help the Final Fantasy Wiki by uploading images.
Ranged weapons
Retrieved from "https://finalfantasy.fandom.com/wiki/Hunting_Bow?oldid=3125146"
Community content is available under CC-BY-SA unless otherwise noted.