The Hundred Gunner is a boss in Final Fantasy VII. Barret, Aeris and Red XIII encounter it in the Shinra Bldg. Instead of the boss theme, the regular battle theme plays during the battle.

-Abilities whose names are not shown when used are highlighted in italics.
-The party cannot escape.
-It is a long range enemy.
-Although Hundred Gunner have defined EXP, AP and gil; the player does not earn any spoils when defeating this enemy.
-**Only used in second form.
-***Only used in third form.
-****Hundred Gunner never uses Sub Artillery.

Hundred Gunner has three forms, and each uses specific attacks. It starts in a form where it uses Aux Artillery and the more powerful Hidden Artillery (his set of gatlings and the energy guns hidden in its arms). After falling below 1066 HP, its guns fold back and it instead uses Main Artillery (the three-barrel turret), which hits the whole party. When its HP is reduced to 533, Hundred Gunner changes into its final form, where it uses its most powerful attack, the Wave Artillery. This attack is used after its Sensor Cannon is fully charged after two turns.

After Hundred Gunner is destroyed, the player moves on directly to the battle with Heli Gunner.

Barret is the only party member who can reach Hundred Gunner with normal attacks. Aeris and Red XIII must use Limit Breaks or magic. The player should have them cast Bolt as much as possible; equipping Bolt to Aeris deals the best damage.

Choose Self
Use <Glass Shatter> on Target
Hundred Gunner's Range = 16

Choose Random Opponent
If (TempVar:OpeningAttack == 0) Then
{

Use Aux Artillery on Target
TempVar:OpeningAttack = 1

Choose All Opponents
Use Main Artillery on Target

Choose Self
Use <Charging> on Target
If (TempVar:ChargeCount = 0) Then
{

Choose All Opponents
Use Wave Artillery on Target
TempVar:ChargeCount = 0 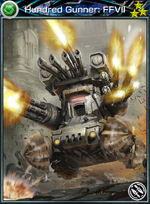 Hundred Gunner is featured on a wind-elemental Ranger Ability Card. Its signature attack, Shift Fang: Wind, deals wind-elemental damage with a base potency of 510 and a base Break Power of 340 at the cost of four wind Orbs at Rarity 3 and three Orbs at higher Rarities.