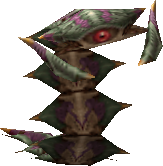 Known to Concordians as the "pricklepede," the hundlegs boasts one of the highest reproduction rates of all the creatures in Orience. This wiggly weakling does not pose much of a threat on its own, but when multiple hundlegs gather, they will circle around their target and strike in turn. Even this, however, is not dangerous, per se—simply annoying.