The Hundlegs, also known as the Sandpede or HandLegger, is an enemy in the Final Fantasy series.

The Hundlegs is an enemy in the Dawn of Souls and succeeding versions of the original Final Fantasy. It's set to resemble the Hundlegs enemy from Final Fantasy IV. Like the other members of the Centipede family, its Magic Defense stat is quite high, so physical attacks are the best means of destroying them. 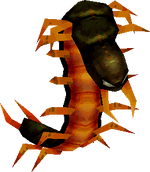 Hundlegs appear near Kaipo. Hundlegs are centipede-like creatures. It stands on its last two hind legs and has a pair of pincers on its mouth and rear.

Hundlegs can be found in the Underworld near Damcyan.

Main article: Hundlegs (The After Years)

It is of little threat to the party. It attacks either with physical attacks or the Earthquake ability, which shouldn't pose too much of a problem in the first place.

Hundlegs is an enemy fought in Duscae and during the Reclaiming Schier Heights hunt. 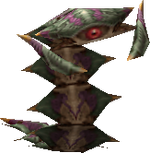 Hundlegs is an enemy family in Type-0. It contains two variants, and two enemies, the Hundlegs and the Pricklepede.

The enemy Hundlegs are numerous all around Dominion of Rubrum territories.

[view · edit · purge]Hundlegs comes from a portmanteau between "hundred" and "legs," making a reference to the roots of the word Centipede and the species itself.