Among the "furred" Behemoths (this excludes Behemoths and Reavers), Humbaba Mistant is the only one that has horns in this size. Humbaba Mistant has a snake for a tail, unlike its related enemies, but much like the original Humbaba from the epic story of "Gilgamesh".

Being a humbaba transformed by a powerful Mist, several times larger than its regular kin, and a fearsome sight to behold, with giant iron-hard horns as hot as molten rock.
The sword it wields is a subject of legend, for it is said that with this blade did the gods first cut Heaven and Earth in twain.

Humbaba Mistant uses combo attacks. Its Strength increases when its HP starts to fall to critical and it gets the Reduce Damage augment; this means that in the original version the maximum damaged will capped at 6999.

After the battle, a scene shows the defeated and de-Misted Humbaba shrink and get crushed by its own giant sword.

Before entering the battle every character should be buffed up, especially with Protect. The first move should be to dispel Humbaba Mistant.

Equipping Nihopalaoa and throwing a Remedy at Humbaba Mistant (after acquiring the Remedy Lores on the License Board) will inflict Sap, Slow, and Silence. The player can also inflict the statuses via other means, and Indigo Pendant makes spells always take effect.

Montblanc will give 2100 gil for defeating the Humbaba Mistant. 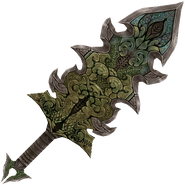 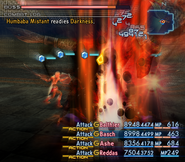 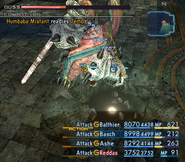