Humbaba has enormous Strength and as soon as battle starts, it will buff with Mighty Guard. Mighty Guard is used again when Humbaba loses 66% of its HP, and it also uses Thundaga. Humbaba's Uppercut deals around 1,500 damage and carries a huge delay. Once Humbaba loses 66% of HP, it gains access to the Tyrant Tail attack, which hits all girls for about 800 damage and has small delay effect. Swipe inflicts moderate damage of about 400 to one target. Once Humbaba is defeated, it will cast Meteor as a last resort to kill the party. Humbaba's attacks inflict delay.

The only way to not see Humbaba's final attack, Meteor, is using eject techs or Telekinesis from Psychic dresssphere on Humbaba (also the fastest way to win the battle) or bribing it. Another option to survive Meteor is to finish the battle with a special dressphere. 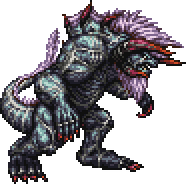 Uppercut.
Add a photo to this gallery

Retrieved from "https://finalfantasy.fandom.com/wiki/Humbaba_(Final_Fantasy_X-2)?oldid=3319516"
Community content is available under CC-BY-SA unless otherwise noted.