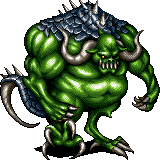 Humbaba (フンババ, Funbaba?), also known as Phunbaba, is a recurring enemy in Final Fantasy that first appeared in Final Fantasy III. In earlier games it was a bulky creature with horns, but more recently it became a variant of the Behemoth family. In some appearances, Humbaba can cast higher tier Thunder spells.

Humbabas appear as regular enemies in Doga's Grotto. They pose little threat to the party, although in 3D version their attacks may petrify their opponents.

Humbaba is one of several monsters released from their prison after Kefka Palazzo caused the cataclysm. He terrorizes the ruined town of Mobliz despite Terra Branford's continuous efforts to slay the beast. In battle, Humbaba can use physical attacks and 1000 Needles, and cast Thundara and Thundaga. It is susceptible to Poison-elemental damage.

Humbaba appears as a member of the Behemoth family. It is fought in the mission M6-6-6 - "The Don's Twilight".

Humbaba is a member of the Behemoth family appearing as an optional boss on the Thunder Plains during the mission "A Fallen Genius?". It is a strong opponent able to perform several physical abilities, cast Thundara, Thundaga, and Mighty Guard. Humbaba uses Meteor as its final attack.

Humbaba is a Notorious Monster and member of the Gigas family. It is resistant to Ice and Lightning, and immune to Bind, Sleep, Gravity. It possesses an innate Ice Spikes effect which cannot be dispelled, has a high rate of Double Attack, and continuously casts Ice Roar below 25% HP. It spawns at the following locations in the Beaucedine Glacier: the small area at (I-7), on the edge of (I-9) and (J-9), roaming around the pond and also on top of the cliff's edge at (G-9) and (G-10), and at (H-8) and (I-8) around the ramp.

Humbaba is a giant/behemoth-type enemy. They usually stay in pairs and are fairly strong. Killing Humbabas is one of the ways to acquire Beastlord Horns, an item needed to sell in shop in order to unlock Sagittarius in the bazaar.

Humbaba is a member of the Behemoth family which appears as a Mark and an enemy. When Humbaba looses around half of its HP it will stand up and heal itself, while also getting the ability to hit for more damage. Its chain gauge doesn't reset upon standing on its hindlegs.

Life in the Peaks can be downright difficult, but the people of the J tribe somehow manage with what little they have. Yet, when what little they have is constantly being stolen by a heartless brute by the name of Humbaba, that is simply salt in their wounds. The J seek a champion that might ease their pain.

Humbaba is a notorious monster encountered in the level 68 FATE "Rattle And Humbaba" in the Peaks, just north of Ala Ghiri. Players must first successfully complete the FATE "Mouth For Water" to trigger it. Players who defeat it and achieve a Gold rating on the FATE will be awarded with a set of Ala Mhigan Barding for their Company Chocobo. It retains its appearance from Final Fantasy VI,

Humbaba is a boss. Its appearance is a slightly reskinned Red Giant.

Some have called this violent monster "King of the Beasts". Its massive fists pummel and crack the earth.

Humbaba appears as a member of the Werewolf family. The only Humbaba that appears is part of the First Watch in Brightmoon Tor. It has the Brightmoon Tor secondary ability skillset of Turning. 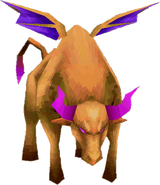 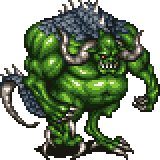 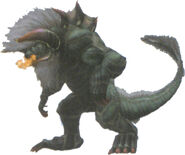 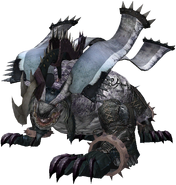 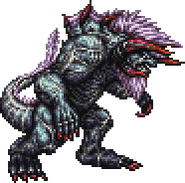 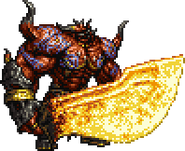 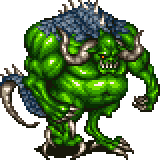