Final Fantasy Wiki
Register
Don't have an account?
Sign In
Advertisement
in: Characters in Final Fantasy Crystal Chronicles: My Life as a King, Lilty 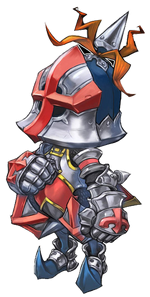 Hugh Yurg (ヒュー＝ユルグ, Hyū Yurugu?) is a male Lilty from Final Fantasy Crystal Chronicles: My Life as a King and a boss in Final Fantasy Crystal Chronicles: My Life as a Darklord. He is a retired Knight who once led the Crystal Caravan of King Leo's old homeland. He acts as a sort of surrogate father to Leo with the disappearance of King Epitav. He stands guard in front of Padarak's castle and runs the Training Hall after its construction, offering weapon skills to all adventurers and battle skills to warriors.

Hugh Yurg talks much about his family's history, mentioning his ancestors once lived in the Lilty kingdom of Alfitaria, but left to escape the tribal wars. He mentions that he once had a family but that they are all gone now, implying they have all passed away. Citizens of Padarak will mention that Hugh Yurg is handsome under his helmet, but is covered in scars he gained from his journeys that possibly left him disfigured, although Mogroe says that the scar he has is hardly noticeable and Hugh Yurg is simply overreacting about them.

Hugh Yurg was one of the last people to see King Epitav when he accompanied him during a Crystal Caravan journey. He blames himself for not being able to stop the King from leaving the Caravan to go search for the fabled "promised land". It was after this that the old homeland of King Leo fell to the Miasma and he along with Leo and Chime wandered the world, searching for a new home.

After the miasma cleared, he, along with King Leo and Chime, arrived at the new land established by King Epitav. As the reconstruction of the kingdom began, he begins to stand guard in front of the castle and help the King recruit new adventurers. He also offers advice to the young King and tells him stories of the past. Once the Training Hall is constructed, he oversees the facility and helps train adventurers to gain experience.

While Mira is enclosed in her bedroom, Hugh Yurg and his apprentice arrived at the steps of the Flying Tower to challenge the Darklord. It's later discovered that it was Craydall who set the challenge. Hugh Yurg is defeated by her minions and sets to continue to Padarak.

Main article: Hugh Yurg (My Life as a Darklord)

Hugh Yurg is battled as the boss of the fourth chapter on Final Fantasy Crystal Chronicles: My Life as a Darklord.

Hugh Yurg appears with earth-elemental cards both with a 3D render and artwork.