Follower
Battle Stances
List of Hpemde Enemies
Hpemde, often referred to as "goldfish" or "dolphins", are often seen passively following adventurers around for 30 seconds or so, and will typically not attack unless attacked and damaged, first. Summoners' Avatars will sense that their masters have aggro and will auto-attack the Hpemde, therefore causing the Hpemde to change from passive to truly aggressive behavior.

Hpemdes that have been damaged and start to attack will occasionally open their mouths for approximately 30 seconds; this doubles their attack output, and decreases their defense by half, much like Berserk. Inflicting sleep on the Hpemde will cause the position of the Hpemde's mouth to remain in the slept position (be it open or closed) for the duration of the sleep. It has also been reported that a critical melee hit, double attack, physical Blood Pact, Weapon Skill, critical damage magical attack, or other such powerful attacks performed while the Hpemde's mouth is open will force it to close its mouth. With precise timing it may be possible to perform two or more powerful attacks during one "mouth opening".

Defeated Hpemde may drop all types of Crystal Clusters, along with Hpemde Organs and Luminian Tissues. 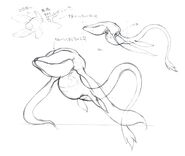