The ability comprises Red XIII howling at a moon that appears behind him.

Howling Moon is obtained when Red XIII kills 72 enemies after he has Blood Fang. A quick way to do this is to farm in the large forest in the Nibel Area past Mt. Nibel, which has six enemies in a single wave (Battery Caps), and approximately 4.4 enemies appear per encounter. Red XIII can equip Magic Materia with All, or use Enemy Skill Materia abilities, such as Aqualung, to kill multiple enemies in one turn. Slash-All is another efficient way to do this, though Red XIII benefits more from spellcasting.

Howling Moon applies Haste, Berserk, and another 60% boost to Red XIII's damage. Haste doubles the rate Red XIII's ATB gauge builds, and Berserk increases Red XIII's physical damage by 50% but forces him to only attack on his turns for its duration. Between Howling Moon's own boost and that from Berserk, Red XIII's physical damage is more than doubled, and Haste will cause him to attack rapidly, making it extremely useful for its duration. If Red XIII has a powerful weapon and a good Strength stat, this can deal great amounts of physical damage. However, most of the time, Red XIII's Magic stat supersedes his Strength and he is typically better built towards spellcasting.

The biggest drawback to Howling Moon is that Berserk may not be desirable, preventing Red XIII from performing any actions other than physical attacks for its duration. Additionally, there are other ways to apply the Haste status, including Time Materia and the Big Guard ability. This means that, once obtained, Earth Rave is a superior Limit for Red XIII the majority of the time, and Howling Moon should be used sparingly.

If the player protects Red XIII from Berserk by equipping him with a Peace Ring, they can keep control of him and even use Howling Moon twice, as the +60% attack power stacks up to 100%. The drawback to this strategy is it prevents him from equipping another accessory and that other means of applying Haste can still make Howling Moon redundant in comparison. Otherwise, it is an effective way to make Howling Moon viable and improve Red XIII's damage throughout the battle without restricting his abilities. This can be a good way to set up the Limit for the Battle Square where to get the best amount of points the player will need to break their Materia, and buffs do not expire between battles.

Howling Moon does not complement the White Wind E.Skill, as the latter will heal his Berserk. 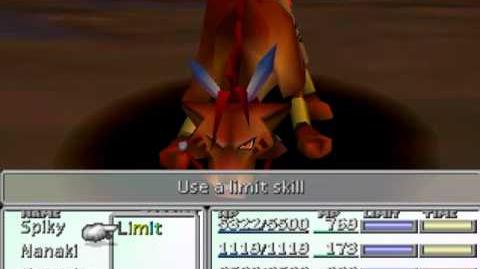