Recover HP and Status Abnormalities for both character and GFs by staying overnight. Saving is also possible at this location.

Hotels in Final Fantasy VIII act as the inns from the previous Final Fantasy games, serving the purpose of fully curing the party members of all ailments, including KO, as well as fully replenishing all HP for 100 gil. Each room also features a save point for players to record their game data.

Located in the small seaside resort of Balamb Town, Balamb Hotel is the tourist's destination for overlooking the peaceful sea. It is also recommended that while staying there a person should try the town's local Balamb Fish. An article about the hotel, along with the rest of the town, is featured in an issue of Timber Maniacs.

A seaside decoration scheme permeates this hotel, lending a calming, tranquil air. Rooms come with three beds, chandelier lighting and a balcony overlooking the oceanside. The soundtrack "Breezy" helps to maintain the atmosphere.

During Galbadia's occupation of Balamb the hotel is used as a base of operations until SeeD intervene, allowing the hotel's owners, a hard working man and his family, to move back in. Later the hotel's foyer serves as a meeting place for a confession between the Library Girl with a Pigtail and Zell Dincht. 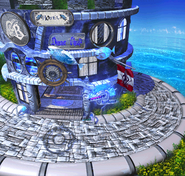 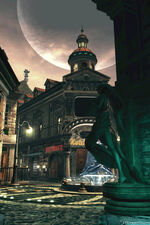 Situated in the central square of Dollet, Dollet Hotel is a regal building of western European design. A television screen is located atop the building overlooking the square, a reminder of the days before the end of the Sorceress War after which all over-the-air frequencies were scrambled beyond retrieval. After Galbadia manages to break the frequency problem and bring such media back on-line, the display presumably becomes functional again.

"Dance with the Balamb Fish", a soundtrack played while in Dollet, lends the hotel a slight regal bearing, as does the hotel's furnishings of carpets, roses, curtains and cozy combination of wood and stone. Each room features three beds with skylight lighting and desk space. An article about the hotel, along with the rest of the town, is featured in an issue of Timber Maniacs.

The hotel in Timber has a train theme, modeled after the town's main train station. With the reception desk tagged as an information booth the foyer, accessible from the street via an automatic door, possesses a toll gate (named "Gatey") that bars anyone from enter passed the foyer without paying. The foyer also features a model train set that travels through the hotel. Model trains constructed by the original owner of the hotel were sold at the Timber Souvenir Shop before he mysteriously disappeared after the war (whether it was the Sorceress War or Galbadia's initial occupation of Timber is unknown).

Each room comes with two beds, a train station-themed bench and a coffee table with seating for three. The Hotel's model trains also make guest appearances along one wall of the room at regular intervals. The reception desk is currently run by Francesca DiMarco. The original owner's daughter can also be found observing her father's trains in the foyer.

The hotel cannot be used during the party's initial stay in Timber; to heal, the player can visit the old man at the train platforms whose Owls Tears water faucet will act as a healing spring.

If the player rescues a child in Timber after they have the mobile Garden, they wake up in the Hotel having stayed there free of charge. 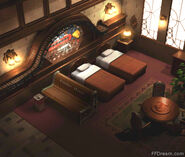 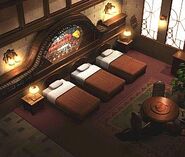 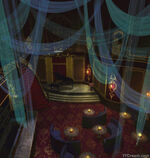 This regal hotel is situated in Deling City, within the city's major business district. This hotel possesses a small lounge and bar downstairs from the foyer. Julia Heartilly began her career as a pianist in this bar before her hit song "Eyes on Me" was announced.

Each room contains desk space, meticulously clean design and artwork. The rooms posses three beds and an exceptional view of the Deling Archway across from the park.

Located in the quiet town of Winhill, the Flower Restaurant features a café-style restaurant on the first floor with rooms for boarding on the second floor. The reception desk is located at the foot of the stairs. Two ex-Garden students, the town's modern day monster hunters and village guards, have board and keep here.

The boarding rooms are surprisingly large in comparison to other hotels. Featuring three beds—one single and a double bunk-bed—each room contains a dresser, tables, a cabinet plus decoration to give that vibe of living in a cottage. 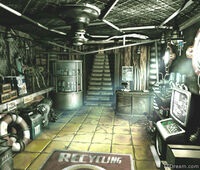 As ramshackle as the rest of Fishermans Horizon, Drunkman Alley also serves as the town store, selling Potions and status recovery items cheaply. A computer with a BBS can be accessed at the front of the store. Each room contains a triple-bunk bed, desk space as well as improvised seating and shelving space. The hotel also plays the town's theme "Fisherman's Horizon" to create a soothing atmosphere.

The player can follow current events from a terminal right by the entrance to the hotel. The hotel is also a location to visit during the Master Fisherman sidequest.

The first shelter upon entering the underground Shumi Village, the Shumi Hotel is a quaint, cozy place designed for the overnight stay of traders who are the village's main visitors from the outside.

Run by a diminutive yet innovative Shumi, each room of the hotel possesses three beds of unique design along with unique lighting fixtures and a music player enabling the player to play any soundtrack they have heard in the game so far. The hotel's default music theme is a piano version of "Eyes on Me", perhaps because Laguna Loire once stayed in the hotel.

Esthar City does not have a hotel, but the same purpose is served by the save point accessed north from Odine's lab, or down from the Airstation; walking under the beam of light above the same point fully heals the party.