Hornet is a special enemy in Final Fantasy X, created in the Species Conquest at Monster Arena when five of each Wasp-species fiends have been captured. It shares its model with the Wasp.
See also: Hornet (enemy)

Hornet has high Agility and Luck stats, so it can be difficult to hit with weaker party members. It has several dangerous attacks: its normal attack may inflict Silence, Sleep, or Darkness with an 80% chance for three turns, and also has a 100% chance of Instant Death. Bewitching Stab inflicts Confuse on its victim, while Venomous Stab inflicts Poison, and both abilities will only be used on party members without the respective statuses. It can use Curaga on itself when it falls below half HP.

Lowering the Hornet's Luck with Jinx will help, as well as using Aim on the party. Casting Reflect on Hornet makes it unable to heal itself with Curaga.

Hornet is not immune to Silence attacks, but it will only work 5% of the time because of its Silence Resist. However, using Silence Grenade works well.

While Hornet is not immune to Armor Break, it will only work 5% of the time. A Frag Grenade or Auron's Banishing Blade Overdrive work 100% of the time, and so are more effective to break its Full Break resistance. 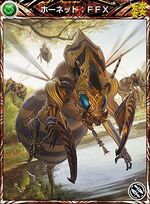 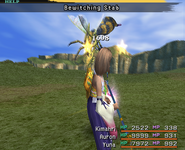 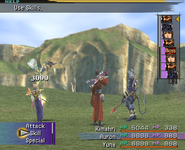 [view · edit · purge]Hornets are the largest eusocial wasps. Some species can reach up to 5.5 cm (2.2 in) in length. Most species make exposed nests in trees and shrubs, but some build their nests underground or in other cavities.