A railroad that connected the East and West continents. Completed about the time the war broke out, it was only used a short time. Since then it has been derelict.

Horizon Bridge is the intercontinental railway bridge that connects Galbadia and Esthar in Final Fantasy VIII. The town of Fishermans Horizon is located at the middle station, but the trains no longer operate. The end stop is the Seaside Station by the Great Salt Lake.

It is presumed the construction of the bridge started before Sorceress Adel came to power in Esthar. After Adel's bid for world dominion, Galbadia and Esthar entered a war and the bridge was abandoned. Engineers fleeing Esthar occupied the middle station, which became known as Fishermans Horizon.

Though the bridge appears to not be maintained, it remains usable. Laguna Loire and his friends once crossed the bridge to reach Esthar on their quest to save Ellone. Galbadia's G-Forces cross the bridge to occupy Fishermans Horizon before being driven away by the SeeD. Squall Leonhart opts to cross the bridge alone with a comatose Rinoa Heartilly, seeking to take her to Esthar to find Ellone who he believes can cure her. During their trip across the bridge, Squall shares his insecurities with her, though he knows she can't hear him. As he reaches the Seaside Station on the Esthar end of the bridge, he is met by his comrades and Edea Kramer, who want to join him.

The appearance of Horizon Bridge on the larger world map is reminiscent of the Big Bridge in Final Fantasy V, which also spans two continents. The bridge cannot be crossed with a mobile Balamb Garden. It is visited as part of the story as background scenery, and is otherwise an unrevisitable location.

The Galbadian end of the bridge on the world map has a Curaga draw point. 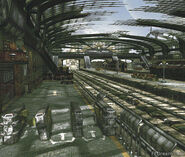