Hope appeared as a recruitable character. He was of the Visitor race and had Navigator as his main job. His attack was Air Wing and his ability was Last Resort.

Hope makes a cameo appearance as a tutor in the in-game manual. He teaches the player about Assists alongside Fang.

Hope is an obtainable character.

A smart but timid boy, this middle school student was on a trip with his mother when they become caught up in the Purge. His mother is lost to him during the battle between Sanctum's forces and those opposing the Purge, and Hope himself is made into a Pulse l'Cie. He hates Snow, blaming NORA's leader for the death of his mother, and works alongside him waiting only for his chance for revenge.

Hope is a purchasable character in the iOS version.

When thrown into tragedy this soft boy turns his anger and grief outward. Struggling to accept his mother's death and his fate as a l'Cie, only when he abandons revenge will this boy take his first steps to manhood.

Hope is an playable character, and is unlocked by collecting White Crystal Shards.

He is a Spell oriented character. His Limit, Last Resort, deals damage in proportion to his Magic and Spirit. 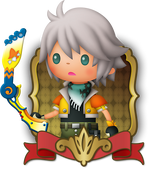 Hope is a summonable Legend in Final Fantasy Airborne Brigade.

Hope is a playable character who could be recruited during the Challenge Event Chasing Hope as the First Time Reward for completing the event's The Palamecia - Bow stage on the Classic difficulty. He was also available in Fang's Oath. 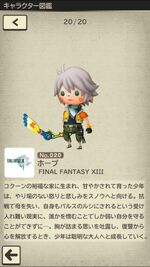 Hope appears as a vision obtainable through summoning. His job is l'Cie. His trust mastery reward is Nue. He possesses the special abilities MP +20%, DEF +20%, Area Blast and MAG +20%. He possesses the magics Esuna, Firaga, Blizzaga, Thundaga, Deshell, Waterga, Aeroga and Raise. He can exclusively use the Tezcatlipoca and the special abilities Attacker and Defender. His limit burst is Last Resort.

Hope appears as light-element ability cards and his Final Fantasy XIII attire appears as a costume for Wol.

Hope appears on Triple Triad cards in the version available via the Final Fantasy Portal App.