Try this on for size!

Hope is a playable character in Final Fantasy XIII. He is the most support-oriented character and the only party member to have only one offensive primary paradigm role. He specializes in casting magic, although his casting speed for offensive magic is not as fast as some of the more offensively-geared characters'. He supports the party with healing and defensive buffs. Despite being able to use the Attack command at the start of the game, Hope cannot use it after Chapter 3, because he does not have the Commando role until Chapter 10. His victory pose is to fold his boomerang and put it in his back pocket, the model for the boomerang disappearing.

Hope's strength lies as a Ravager; out of the six playable characters, he has the highest Magic stat, and is the only one to learn all elemental spells up to the -ga level, though he lacks the -strike skills, meaning he cannot physically attack in the role. He learns all the Ravager's passive abilities.

Hope's full ATB skill, Last Resort, deals non-elemental magic damage to random targets. He is a great Ravager, but is outclassed by Lightning, Snow and Fang by the endgame, where casting speed matters more than damage or versatility, seeing that area spells or elemental exploitation matter less due to all the tough enemies being singular, and Imperil making elemental weaknesses less relevant.

As a Synergist, Hope is proficient with defensive buffs, learning Protect, Shell and the Bar-Spells the earliest. Hope learns Haste as his last spell, but once he does, he can outperform Sazh as a Synergist.

Hope learns all the spells as a Medic, making him possibly the best Medic in the game. Vanille learns the spells earlier, but Hope tends to have higher Magic and a faster casting speed.

Hope can function as a Commando, but has rather slow casting animation for offensive spells, and he doesn't learn Launch or Adrenaline. He can deal damage with Ruin and Ruinga with his high Magic, and he only requires minimal investment to get Ruin.

Hope's weakest roles are Sentinel and Saboteur. As a Sentinel, Hope resembles Lightning, learning Elude and Evade and even Entrench and Vendetta. As a Saboteur, Hope learns all the multi-target -ga spells, meaning each spell costs him three ATB segments, and while they can hit multiple enemies, the success rate is lower. The battles where status ailments are needed the most are usually against a single strong enemy, making the area versions less useful.

Hope has the lowest HP of all the playable characters, but he has the highest Magic. 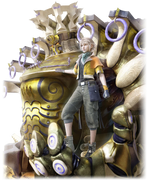 Alexander is a non-elemental Eidolon, a robot who turns into a colossal fortress in his Gestalt Mode. When Hope calls for Alexander, he is launched from an even larger fortress in the sky. Alexander is a defensive Eidolon, drawing all enemy attacks to itself like a Sentinel.

Hope is the only member of the main party whose Eidolon is the same gender as its l'Cie partner.

Hope fights with boomerangs that, thanks to Antimatter Manipulation Principle and design, he can throw once and hit multiple enemies without having to throw it again. When performing multiple physical attacks using his boomerang as a Commando, Hope moves his hand as if to throw it again even though it is not in his hand. Hope is the only one able to cast Ruin without holding his weapon; this can be accomplished by choosing Attack first and stacking Ruin after.

Hope puts his boomerang away as his victory pose, but if seen from behind, the boomerang vanishes. Cutscenes avoid showing where he pulls it from with camera angles cutting it off screen. It is never implicitly stated where Hope received his first boomerang; the first time it is shown is during the scene where Vanille receives her weapon, but she does not give the boomerang to Hope. Hope has the Airwing equipped to him before this scene, while Vanille doesn't have the Binding Rod equipped until she finds it. It is left unclear as to whether or not he had it with him in Bodhum.

Hope's starting weapon, Airwing, is balanced with slightly higher Strength. It is quickly outclassed. It has "Critical: Shield". Ninurta has equal Magic and Strength, and has "Physical Wall". Hope, however, doesn't need balanced stats as he is geared toward Magic use in the roles he is most proficient in. With Ninurta Hope is still going to have a better Magic; the Strength stat would only be used as a Commando when manually selecting Attack.

Hawkeye boosts Hope's Magic the most, supporting him in his main roles of Ravager, Medic and Synergist, making it possibly his best weapon for upgrading, seeing that he receives it early and upgrading it is not expensive.

Vidofnir has "Defense Maintenance" that at Lv I makes defensive buffs last x1.4 longer, and at Lv II x1.8 longer. It also has Positive Effect as a synthesis ability. This weapon augments Hope's Synergist abilities, but doesn't give as much Magic as Hawkeye.

Alicanto has balanced yet mediocre Strength and Magic and "Stagger Lock". As Hope's main offense is in Ravager role, he will likely struggle to benefit from this weapon, seeing as his normal balanced weapon even has better stats than this one.

Simurgh is Hope's Strength boosting weapon with "Stifled Magic" and the synthesized ability "Ethereal Mantle". He'll be immune to physical attacks, but magical attacks still hurt, healing magic will have no effect on Hope, and one would need to equip him with four Kaiser Knuckles to synthesize the Ethereal Mantle.

Otshirvani has "Siphon Boost" that augments the effects the Commando's Faultsiphon and Lifesiphon and the Ravager's Fearsiphon; Lv I boosts them by x1.5 and Lv II by x2. "ATB Rate" can be synthesized for a speed bonus. It has average stats with more Magic.

Malphas is the weapon sold by Gilgamesh, Inc.. It has balanced stats of high Strength and Magic and "Paper Tiger" that cuts his HP; especially bad for Hope as his is already low. It has the synthesized "Damage Wall" that mitigates damage taken.

Hope rides a Dreadnought in the Vile Peaks in Chapter 4, allowing the player to control him doing so. While on the robot the player can bulldoze through obstacles and doesn't fight battles, as enemies are flicked out of the Dreadnought's way. In Chapter 5, Hope asks to take lead, and becomes the controlled party member while on the field. In late Chapter 9, the player becomes able to freely configure their party make-up and the player can use Hope in the lead. If he is the lead character while on the Archylte Steppe, the player can control Hope while riding a chocobo and look for hidden treasure.

There is an optional scene between Hope and Vanille, viewed by visiting Yaschas Massif.

Hope is a mandatory party member in the following boss battles: