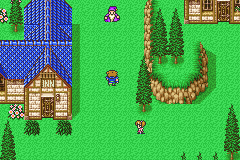 "Home, Sweet Home" plays as the background theme for the town of Lix, Bartz Klauser's hometown. It also plays during his flashbacks when he and his comrade Warriors of Light visit his hometown.

The arranged version of the "Home, Sweet Home" by TOSE for Final Fantasy V Advance is included in the limited Final Fantasy Finest Box collection. It is the thirty-first track of the collections' second disc, which is analogous to the original soundtrack's first disc.

The original theme is included in the music player. It is on the Memories of FFV album bought for 100 gil from Aldare's shop in Galdin Quay.

"My Home, Sweet Home" makes an appearance as a bonus battle theme. It must be purchased in the PP Catalog before being used, and once purchased it may be picked by default in all modes for battles against Bartz, Exdeath, or Gilgamesh, or taking place at the Interdimensional Rift.

"Home, Sweet Home" is a Field Music Sequence that is available to the player by default.

"Home, Sweet Home" was arranged by Yuzo Takahashi as the theme "Memories of a Bygone Day." It was released as the twelfth track of the original soundtrack.

A piano arrangement of "My Home, Sweet Home" is featured in the Final Fantasy V Piano Collections album.

A vocal arrangement of "My Home, Sweet Home," named "Harukanaru Kokyou" is featured It is sung in a mix of English and Saami, an indigenous language spoken in the northern parts of Scandinavia.

What do you think is being sung by this mysterious song? Think carefully, looking at the words while listening... You will probably be able to understand the beautiful poem. The [duet] by the two is amazing.

"My Home, Sweet Home" from Final Fantasy: Love Will Grow

Final Fantasy: Love Will Grow features a vocal arrangement of "My Home, Sweet Home," named "Harukanaru Kokyou" as well. This version is technically written in Japanese, although it is sung as if the Romaji were spelled inversely (i. e. from right to left). The song is mostly fragments of sentences, of which only a rough English translation can be rendered.

An arranged version with vocals sung by Manami Kiyota, called "Evanescence", is included on this album.

Within a forest where I'd gotten lost
I heard the sound of a secret bell
Led forth, I proceeded
And arrived at an evening banquet

A young girl danced lazily
Enveloped in a red garment
The color of the seething flames
Captivated, I stood a moment

Her fingertip grasped the wind
And outlined a beautiful circle
The decorations in her hair swayed, sparkled
And made the slightest sound

Her song rocked my memories
Singing of the joys of life
A lullaby, inviting slumber
I'd heard it before I was born

So I may one day meet again
The continuation of my ephemeral dream
I look up into the sky and hum
That strange, nostalgic songs

"My Home, Sweet Home" appears on this arrangement album, arranged to sound like cafe-theme music.

A live recording of "Home, Sweet Home" is the sixth track on the A New World: intimate music from Final Fantasy - Volume II album

The "Home, Sweet Home" version from Final Fantasy V: Dear Friends is found in these albums as their tenth track.

The "Home, Sweet Home" version from Final Fantasy V: Dear Friends is found in this album as its sixth track.

"Far-Distant Home Town" is included on the fourth disc of this collector's edition set.