Non-player character
Mr. Holzoff is a non-player character in Final Fantasy VII who lives in a cabin at the base of Gaea's Cliff. Cloud wakes up in the cabin if he passes out while traversing the Great Glacier. Mr. Holzoff's wife, living in the Icicle Inn town, explains that he went mountain-climbing thirty years prior[note 1] and did not return.

Thirty years before, Mr. Holzoff was out climbing with his friend, Yamski, hoping to see what was on the other side of Gaea's Cliff. Neither were prepared for the biting cold wind on the cliff that lowered their body temperature. Unable to bear it, his friend Yamski cut his own rope and Mr. Holzoff didn't even notice until it was much too late. He now gives shelter to fellow climbers who want to take on Gaea's Cliff.

Holzoff tells the party a story. 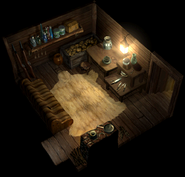