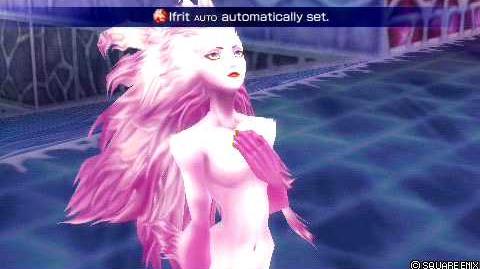 The Holy glitch, also known as the Link Glitch, is a glitch in Dissidia Final Fantasy and Dissidia 012 Final Fantasy. Though the exact execution for the glitch varies between characters, in simplest terms the glitch tricks the game into thinking an attack has hit when it hasn't, leading into a number of new combo attacks, and allowing certain attacks to strike the opponent outside their normal range of effect. The glitch is commonly known in the fandom as the Holy glitch due to Bartz and Terra being among the first characters to be recognized for causing it with their Holy attacks.

The concept behind the glitch is as follows: the player uses a projectile attack, then uses a second attack. If the timing is exactly right, the projectile will hit the opponent as the second attack is performed, and the game will detect this as the second attack hitting, even if it actually does not. This allows attacks to be chained and combos continued even if they do not connect. An example of the glitch is viewable in the video to the right: Terra uses Meltdown, then performs Holy Combo. Meltdown hits Cloud, and Terra continues the Holy Combo attack by firing Flare, even though Holy Combo did not connect. Because Meltdown connected, the game reads this as Holy Combo connecting and the combo continues.

Confirmed instances of the glitch include the following. This is not a complete list, just a series of examples. Theoretically, almost any character able to use a long-range, slow projectile attack is capable of performing the glitch. In all the following instances, the proper timing to perform the glitch varies and is often very precise.