This sanctified water is most efficacious in increasing resistance to debuffs, with no ill side effects.

The Holy Water (聖水, Seisui?), also known as Revivify, is a consumable item that appears in various games. It usually cures the Zombie status. In some versions, Holy Water is used to remove the status effect Curse. In some games it can also be used against undead opponents as an instant kill.

Holy Water can instantly kill undead enemies. It will also restore 1/8th of a character's Max HP. Holy Water will restore HP regardless of being under the Zombie status.

70 can be used to customize Zombietouch to a weapon.

Holy Water cures Curse, and has a small chance of removing the Doom status (but it frequently fails to take effect). Holy Water can be bought from various merchants as well as crafted by alchemists. It is also a valuable ingredient for synthesizing Holy weapons.

Removes Curse from one ally.

Holy Water restores a small amount of HP, and casts Protect and Shell for 30 seconds. It can be bought at General Stores for 840 gil and on The Ark for 1 EP. It can be won at the Slaughterhouse.

Holy Water is a reagent introduced in Final Fantasy XIV: Heavensward. It can be crafted by

Alchemists or purchased in Idyllshire. A

Use holy water to lift the curse of undeath from a unit.

It can be Mirrored by a Ranger to lower a target's Resilience.

Curse has a potion icon before its name. It can be bought in numerous towns across the various worlds for 300 GP. It has 4 uses, and also increases a Robot's HP by 9 when equipped on them. The item heals Curs from one target.

Holy Water is a crafting material, bought for 1,000 gil in Moschet Manor.

Holy Water appears in the Medieval and Final chapters. It restores a great amount of HP when used. 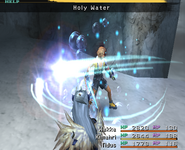 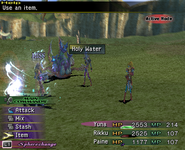 Holy water is water that has been blessed by a member of a clergy or religious figure. The use for baptism and spiritual cleansing is common among several religions, from Christianity to Sikhism. The use of holy water as a sacramental for protection against evil is common among Anglicans and Roman Catholics.