Rod containing the power of Holy.

Holy Rod (ホーリーロッド, Hōrī Roddo?), also known as Pearl Rod, is a recurring weapon in the series. It is often a high-ranked staff or rod, and is naturally Holy-elemental and can sometimes cast the spell Holy, either by using it as an item or by attacking with it. It is usually restricted to mage classes.

The Holy Rod (originally called Pearl Rod) is a high-ranked rod used by Gogo, Relm, and Strago. It is Holy-elemental and casts Holy when used as an item and has a random chance of casting the spell when attacking with it. It has an attack power of 124. One can be found in Tzen and it can also be purchased in Thamasa in World of Ruin for 12,000 gil.

The Holy Rod is the strongest rod in terms of Attack Power and second strongest in terms of Magick Power. Its license requires 35 LP to activate. The Holy Rod is a unique weapon as it is the only weapon to have both an elemental affinity to and effect of the Holy element, making all normal physical attacks dealt by the rod 50% stronger than its Attack power would suggest. Holy Rod provides +53 Attack, +2 Magick, and +30 MP. Rods are among the slower weapons with 2.72s charge and 1.2s action time. It can be found as a treasure in the Pharos and Cerobi Steppe.

In the Zodiac versions, it now provides 63 Attack, 6 Evade, +4 Magick Power, 33 CT, is Holy-elemental, increases Holy damage by 50% and requires the Rods 4 license for 50 LP. It can be found as a treasure: Cerobi Steppe (Old Elanise Road), The Great Crystal (Bhrum Pis Avaa). It can only be used by the White Mage.

The Magician's Wand was named the Holy Staff in pre-release builds.

A high-class rod imbued with holiness. This rod is used mainly by high level mages as it requires a special license and the ability to use holy powers to wield.

Holy Rod is a global exclusive Light-elemental weapon that raises ATK by 10 points, MAG by 53 points, and MP by 15%. It is obtained from the Final Fantasy XII event, Henne Mines. 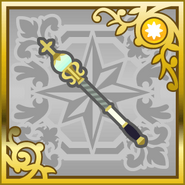 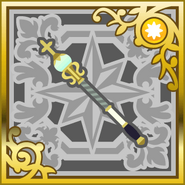 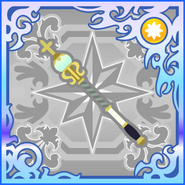 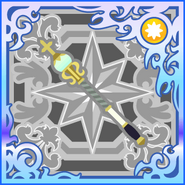 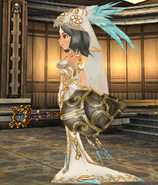 This gallery is incomplete and requires Final Fantasy VI (iOS) added. You can help the Final Fantasy Wiki by uploading images.
Blunt weapons
Community content is available under CC-BY-SA unless otherwise noted.
Advertisement