The Holy Knight (ホーリーナイト, Hōrī Naito?) is a recurring job class in the series. It is often the job of Agrias Oaks from Final Fantasy Tactics, a Holy Knight in service to the Lionsguard.

The Holy Knight is similar to the Paladin; often having strong defenses, can equip both swords and knight swords, and excel in swordplay. The distinct difference between Paladins and Holy Knights are the type of Holy Sword skills the latter utilizes, having the ability to perform skills that both deal heavy damage and inflict status ailments on foes.

Holy Knight is a special job. It is Agrias Oaks's default job, and focuses on swords and techniques that cause heavy damage from afar. In addition, Delita has the Holy Knight job from Chapter 2 onwards, with the addition of Chant.

While the Holy Knight does not appear as a usable job in Final Fantasy XIV, it is mentioned by Jenomis cen Lexentale as the occupation of the historical figure, Agrias Oaks. When Agrias is fought as boss within the Orbonne Monastery, she utilizes several Holy Sword abilities from Final Fantasy Tactics.

Holy Knight was a limited-time job available exclusively to the Agrias Oaks unit. The job's single ability, Judgment Blade, would damage all foes within an area of effect.

Holy Knight is Agrias's job. It serves a physical attack role, wielding swords and daggers. Agrias as a Holy Knight is able to equip high leveled knight abilities, while also having access to intermediate White Magics. Her Soul Breaks are based on the Holy Knight skillset from her original game.

The Holy Knight is exclusively the job of Agrias Oaks. The job serves as a physical and magic tank in combat, giving Agrias a collection of abilities that protect and buff her allies, while also having attacks that can debuff multiple enemies.

Wiegraf from Final Fantasy Tactics has unique version known as the White Knight (ホワイトナイト, Howaito Naito?) as his job. It utilizes the same abilities as the Holy Knight, but excluding Divine Ruination.

The White Knight appears on a gold card. 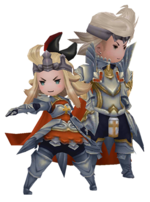 The Templar (聖騎士, Sei Kishi?, lit. Holy Knight) is a job in both Bravely Default and Bravely Second: End Layer. The Templar is proficient in swords and heavy armor. The job's abilities temporarily raise their stats, while also having abilities that revolve around Defaulting and gathering BP. The Templar also has a variety of light-elemental physical attacks.

Delita is a Holy Knight from Final Fantasy Tactics.