Holy... the ultimate White Magic. Magic that might stand against Meteor. Perhaps our last hope to save the planet from Meteor.

Holy is a powerful magic spell in Final Fantasy VII. The strongest White Magic spell, it can only be summoned by the White Materia, and will cleanse the Planet of all threats. As the only force capable of fighting Meteor, freeing Holy is the main focus of the game's latter parts.

When Sephiroth acquires the Black Materia that can summon Meteor, Aerith travels to the Forgotten City and begins to pray to summon Holy to stop him. Cloud and his allies follow Aerith, and watch as Sephiroth kills her and the White Materia falls from her hair and into the water near where she was praying. As she never told her plans to anyone, Cloud and his allies are unaware of Holy's existence and continue on to pursue Sephiroth.

Later, Bugenhagen reveals Holy's existence and states that Holy is the ultimate defense against threats to the Planet, and when summoned, will erase anything that presents a danger. However, this may include humans as well; it depends on Holy and the Planet. This is a particular problem due to the Shinra Electric Power Company and Mako energy. Bugenhagen states that when someone prays for Holy, if their prayer is answered the White Materia will glow green. Although Cloud assumes Aerith was killed before she could summon Holy, it is revealed in a vision that she succeeded moments before Sephiroth killed her. However, Sephiroth is holding back Holy's power, preventing it from moving.

At the end of the game, Cloud and his allies kill Sephiroth and Holy moves to destroy Meteor which is destroying Midgar. However, Meteor is too close to the Planet and the gravity causes Holy's energy to be unfocused. Aerith commands the Lifestream to emerge from the Planet and push Meteor back, allowing Holy to destroy it and save Midgar from further chaos. Humanity survives the disaster to rebuild, and the ruins of Midgar are abandoned.

Holy has appeared as an attack associated with Aerith in other games. It is akin to the recurring series' Holy spell, rather than the all-encompassing power seen in Final Fantasy VII.

Please... lend us your strength!

Holy is Aerith's aerial Assist HP attack. It charges energy and consumes the opponent in a blast of holy energy. Aerith has Block Mid priority while charging, thus only guard-crushing attacks will be able to hit her. Its additional effects are Wall Rush and Block. 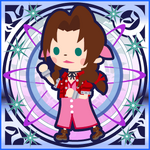