Holy, also known as Pearl,[1][2] is an Attack spell in Final Fantasy VI. It is a strong spell that deals

Holy-elemental damage, and can only be used to hit one target. It is learned naturally by Terra at level 57 and Celes at level 72, and can be earned by other party members through magicite.

Holy is an added ability to the Holy Rod, Holy Lance, and Lightbringer.

As a spell with a power of 108, it deals damage with the following formula:

where "Level" refers to the user's level, and Magic refers to the user's Magic stat. As a standard spell, when Holy is group-cast, its damage is halved, the target's Magic Defense and shell play a role in mitigating damage, and the spell can potentially be blocked by Magic Evasion.

Holy is a very strong spell in temrs of damage output relative to its MP cost, although its MP cost is still fairly prohibitive. It is more MP-efficient than the three high-tier elemental spells (Firaga, Blizzaga, and Thundaga), but each of these can be group-cast. Holy is most closely comparable to Flare, another high-level single-target spell. Flare's damage output calculation is lower than Holy, but Flare ignores Magic Defense, and has no element. As such, Flare is stronger against enemies resistant to magic damage, while Holy can be very strong in exploiting weakness to holy-elemental damage.

Though Terra and Celes learn Holy naturally, they learn it so late that it is better to teach them the spell earlier. For other party members, as an Attack spell, the player should prioritize teaching Holy to party members with a high natural Magic stat and access to mage equipment. This includes Relm and Strago; Mog and Shadow have high Magic stats, while Gogo has access to mage equipment. Though Sabin will be built toward magic damage, his access to Aura Cannon means he can already inflict holy-elemental damage, while Phantom Rush gives him a powerful magic attack for no MP. Holy should be prioritized to spellcasters, but other party members can be taught the spell as a way to exploit enemies' elemental weaknesses, though this is not a high priority.

Holy, along with Flare, is a very powerful MP-efficient spell, and should be used against single targets. Against multiple targets, spells such as Meteor, Meltdown, and Ultima are better choices; these spells will also deal higher damage to a single target than Holy would to a single target, but are much less MP-efficient. If the spellcaster is using Celestriad and MP is no object, it is better to simply use Meltdown or Ultima. 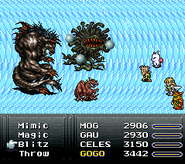