Hobgoblin (ホブゴブリン, Hobugoburin?) is a recurring enemy in the series.

Hobgoblin is a dummied enemy, meant to be the strongest of the Goblin-type enemies in the game.

Folks on Kholusia have never gotten on all too well with hobgoblins. There's been conflict for as long as anyone can remember. They're clever enough to use tools, but they lack patience and foresight. You'll never catch them plowing a field, to say the least. Building's not in their nature─but thievery and destruction, they most certainly are.

The Hobgoblin are the First's counterparts of the Goblins from the Source. They appear in the Kholusia region. Compared to their originals, the Hobgoblin's appearance are more classic, showing their monstrous faces instead of hiding them with masks.

Players can obtain a Wind-up Hobgoblin Minion through the Retainer system.

Hobgoblin is a daemon appearing in caves of Cleigne, Leide and Duscae and during night time. They can also be fought during the Footfalls in the Dark and Baby Snatchers Hunts. 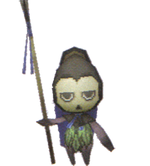 Hobgoblin is an enemy fought at Mt. Lux, Mt. Liene, Mazewood, and Crystal Temple. They battle with regular physical attacks and Goblin Punch, but are of no threat to the party. It has Leather Shoes to steal and can drop the Iron Bangle.

[view · edit · purge]Hobgoblin is a term typically applied in folktales to describe a friendly but troublesome creature of the Seelie Court. Hobgoblins seem to be small, hairy little men often found within human dwellings, doing odd jobs while the family is asleep. Often, the only compensation necessary in return is food. It is possible that the "hob" in their name comes from the hob, a part of the hearth meant for holding food or utensils. Hobgoblins are fond of practical jokes and seem able to shape-shift. Like all of the fae folk, hobgoblins are easily annoyed. The term "hobgoblin" has grown to mean a superficial object that is a source of (often imagined) fear or trouble.