Defeating Necron
The Hill of Despair is the location of the final battle of Final Fantasy IX, where Necron is fought. The party reaches it after battling Trance Kuja. The exact nature of the Hill of Despair is never explained, but it may be a kind of Purgatorial plane.

After fighting and getting blasted by Kuja's Ultima spell, Zidane wakes up to find himself with his friends in the Hill of Despair, where Necron, a deity whose sole purpose is to destroy all life, reveals its intentions. Necron declares it will revert the world to the "zero world", a world with no crystal and thus no life, claiming this is what all living beings crave, as there would be no fear of death in such a world. Zidane opposes Necron, and wants to prove how much they want to live despite life's fleetingness. The chosen party's allies revive the battle party, who face Necron head on. The battle ends in Necron's supposed defeat; though it withdraws, it claims it will exist as long as there is life in the world. After the battle, Kuja teleports the heroes outside of the Iifa Tree.

The Hill of Despair appears as the Battle Music Sequence for "The Final Battle", albeit the area where the player chooses their characters against Necron.

The concept art for the Hill of Despair shows the party battling Hades instead of Necron. That is because Hades was originally planned to be the final boss of Final Fantasy IX, but was changed to an optional boss later in development. Hades has an eye within his sword and numerous prominent eyes peering from his throne. The final battle arena also has blinking eyes on the interior walls. It is possible that Hades represented the final culmination of the eye motifs observed throughout the game, seen largely on structures of Terran design. 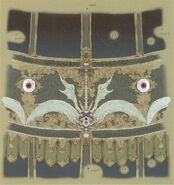 Zidane on the Hill of Despair.