Hill Gigas is fought in the area to the west of the entrance to the Cavern of Earth, and is one of the strongest enemies of the area. It deals heavy physical damage and has high HP. It is often fought in packs of three.

Hill Gigas is an optional boss fought on the Dreadnought fought inside a treasure chest, and later on as regular enemy in Deist Cavern and Mysidian Tower. It deals high physical damage, and has very strong defense and HP stats, making it very difficult to defeat. It drops giant equipment, in the form of Giant's Glove and Giant's Helm.

Hill Gigas is fought in Zozo, and is one of the strongest enemies. At the time of encountering in the World of Balance, it is relatively difficult to defeat, due to having the second highest HP in the game at the time it is encountered, although when the player later returns in the World of Ruin, it is much weaker relatively, as the player will be much stronger on return. The enemy is not only deadly due to its physical damage, it can also use Magnitude 8 as a final attack, which the player can avoid by inflicting Imp, or instant death attacks. Locke can steal a powerful Gigas Glove from Hill Gigas.

Hilgigars is a boss fought on the Conde Petie Mountain Path. It can use Earthquake to deal heavy damage to the entire party, along with having high physical stats. It possesses a Fairy Flute for Zidane to steal, a very rare steal.

Blood Gigas is fought in the Stilshrine of Miriam and the Draklor Laboratory, standing next to walls and attacking enemies which pass through.

Hill Gigas appears as an enemy. 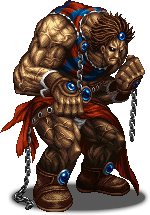