Hilgigars is a boss from Final Fantasy IX fought on the Conde Petie Mountain Path. His name is a mistranslation of "Hill Gigas".

Knock Down, Curaga, Earthquake, Hiphop
I no can eat!

Hilgigars uses Earthquake to damage the whole party at once. It is very difficult to steal the Fairy Flute from him. Even with Bandit equipped each steal attempt only has a 1/256 chance of success. The flute otherwise cannot be obtained until Oeilvert.

Casting Float on everyone protects the party from Earthquake. Zidane should steal while Vivi casts Slow or focuses. Dagger/Eiko can heal and cast Float, targeted on the entire party each turn. It should be renewed every couple of turns, or else the party may be caught in Hilgigars's Earthquake attack.

Once Zidane has stolen enough items from Hilgigars Vivi should cast Bio, Dagger summon Ramuh, and Eiko summon either Fenrir or Phoenix, healing when necessary.

Template:FFIX AI Note: There are two other functions in Hilgigars's script for running a little dialog in case Eiko casts a summon on Hilgigars. They have no impact on the AI of Hilgigars.

The Hilgigars, under its proper romanization as "Hill Gigas," is fought in Record Keeper as a boss in some Final Fantasy IX events, as well as a boss in the Crushdown Nightmare Dungeon. In all its forms, the Hill Gigas primarily relies on physical blows and Venom Mist, poisoning the party. 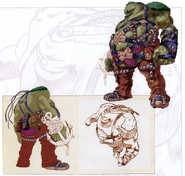 Hilgigars comes from "hill gigas". [view · edit · purge]Gigas is a popular term for races of giants in fantasy games. Gigas is a Greek word meaning "giant", originally used to describe the race of Gigantes in Greek mythology and is used in the scientific name, as the specific epithet, of hundreds of species of animals and dozens of plant species to denote their size.

Retrieved from "https://finalfantasy.fandom.com/wiki/Hilgigars?oldid=3018417"
Community content is available under CC-BY-SA unless otherwise noted.