When Hilda found out about my little affair, she used her magic and turned me into an oglop. Then she stormed off in the new airship, which I named Hilda Garde. Pretty ironic, eh?

The Hilda Garde is a series of airships in Final Fantasy IX. They are steam-powered ships created by the Regent of Lindblum, Cid Fabool IX, named after his wife, Queen Hilda. 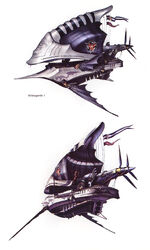 The Hilda Garde I was seen as an amazing piece of technical engineering, as it was the first steam-powered airship in Gaia. Running without a Mist engine, it can fly outside of the Mist Continent. Cid and his assistant engineer Zebolt used ground-breaking technology to construct it. After a fight with Hilda, due to her discovering the Regent's womanizing, she turned him into an oglop and stole the Hilda Garde I. It was later taken from her by Kuja.

Along with his Silver Dragon, Kuja uses the Hilda Garde I as his primary transportation across Gaia. When the party is captured at Kuja's Desert Palace, Kuja sends Zidane Tribal and three of his friends to Oeilvert to retrieve the Gulug Stone. They travel to the Forgotten Continent on the Hilda Garde I, piloted by Kuja's lackeys Zorn and Thorn.

When they return with the stone, Kuja snatches it, kidnaps Eiko Carol, and flees on the Hilda Garde I to the Lost Continent, inside the fiery reaches of Mount Gulug. Zorn and Thorn are destroyed by the party at the bottom of the volcano, and Kuja flees, though it is not known whether by teleportation or by airship. However, the Hilda Garde I is never seen again.

After the Hilda Garde I was stolen, Cid began working on the Hilda Garde II. His skills remain hampered as an oglop (and later on as a frog), and thus the Hilda Garde II is poorly constructed and deemed a failure. The player first gets a glimpse of it in an ATE with Steiner when the party first visits Lindblum and is lost in the vastness of the Lindblum Castle and the town.

Though not as successful as the Hilda Garde I, it is still used by the Regent to travel to Treno to partake in the card tournament. The pressing attack by Bahamut on Alexandria forces Cid and the party to board the airship and fly from Treno to Alexandria to assist in the city's defense.

During the flight, comments are made on the craft's ill design, with Vivi getting motion sickness due to the unstable flight. Eiko recognizes the signs of the Holy Judgment summoning and jumps off the airship's prow to join Garnet, who has been lead by the same signs atop Alexandria Castle.

The Hilda Garde II drops Zidane and party at the castle entrance, where he rescues Garnet and Eiko, who have summoned Alexander. As the Invincible prepares to obliterate Alexander and the majority of the city, Zidane, Garnet, and Eiko grab hold of the Hilda Garde II's flylines and lift off into the sky, escaping the destruction. This is the last time the Hilda Garde II is seen. It is implied that while the airship survived the destruction of Alexandria, it suffered heavy damage and Cid decided to build a new airship from scratch instead of repairing the Hilda Garde II.

After reconciling with Hilda and being turned back into a human, Regent Cid begins working on the Hilda Garde III. Many of the materials used to build the Hilda Garde III came from the Blue Narciss, a ship Zidane and his party used to ferry across the the oceans of Gaia (the Blue Narciss, in turn, had been remodeled from the Alexandrian ship that Queen Brahne commanded during the First Battle of the Lifa Tree). Cid presents the craft to the party after they return from Mount Gulug.

Cid may have constructed a Hilda Garde IV, as he claims his new Hilda Garde is the fastest ship yet when leaving to attend Tantalus's performance of I Want To Be Your Canary in Alexandria in honor of Queen Garnet. It is unclear whether he means he has built an entirely new ship, or if he is talking about the Hilda Garde III.

The Hilda Garde III is the first airship freely usable by the player on the world map. Unlike the Invincible, which is obtained later in the story, it can only land on grassy areas, but not on barren lands, desert areas, swampy areas or snowy areas. Neither airship can land in forests. Taking flight the first time earns the Take to the Skies achievement/trophy in the latest versions of Final Fantasy IX.

When the party is taken to the Forgotten Continent by Zorn and Thorn on the Hilda Garde I, approaching the ship on the world map opens a shop.

"Aboard the Hilda Garde"

When the player pilots the Hilda Garde III around the world map or explores its interior "Aboard the Hilda Garde" plays, which can be found as track 1 of the fourth disc of the Final Fantasy IX Original Soundtrack. The theme is included in the music player in Final Fantasy XV.

The design of Hilda Garde I was used to depict the "SS Highwind", one of the treasures rewarded..

Concept artwork of Hilda Garde I.

Inside the Hilda Garde I.

Hilda Garde I flying in the world map.

Inside the Hilda Garde III.

The airship series is named after Regent Cid's wife. From Old High German, Lady Hilda's name breaks down into the words hild and gard or gerd and translate as "war" and "protection" respectively, and in full can mean protective battle-maid.