Missiles (used in Cid's Limit Break Highwind)
The Highwind is the player's primary airship in Final Fantasy VII. It can land on plains in the overworld and only patches that are big enough for it to fit. The player can board the airship while riding a chocobo, in which case the bird will be in the stables inside the airship; this way, the player can transport their chocobo to different areas. There is a man in the command room that acts as a save point who can fully heal the party for no cost.

The Highwind can be used to ram into Ultimate Weapon to make it stop fleeing and fight. In some battles with the Ultimate Weapon, the deck is used as the battleground. The airship is also used as a part of Cid's Limit Break Highwind, in which the Highwind rains 18 missiles down on random targets.

The Highwind was designed and built by Cid Highwind, Shinra Electric Power Company's chief aeronautical engineer. A poster of the newly constructed Highwind is on display in the Showcase Room of Shinra Building in Crisis Core -Final Fantasy VII-. The airship was confiscated from Cid after the failed launch of Shinra No. 26 rocket and would serve as Shinra's main flagship from then on. Cloud can spot the Highwind stationed in Junon airfield while first passing through during Rufus Shinra's welcome parade.

The Highwind is docked in Junon where Rufus plans to execute Tifa and Barret as scapegoats for the Meteor crisis. The other party members infiltrate Junon and rescue Barret, while Cid convinces the airship's crew to abandon Shinra and return to serve him. The airship thus stolen from Shinra, Tifa jumps off the Mako Cannon onto the Highwind, and from then on the ship serves as the party's main transport and headquarters.

Before the party descends to the Northern Cave for the final battle, the Highwind reveals two jet boosts at the back, replacing the two propellers. After defeating Sephiroth, the party is stuck deep within the Planet, and the Highwind dives into the crater to rescue them; the cause of the nose-dive is not explained, and Cid's consternation implies the crew acted on their own, or that the ship, tethered near the crater entrance, was pulled down.

As the ship is blasted out of the crater by Holy its tails fall off along with some of the shell. Cid pulls an emergency lever that jettisons the rest of the load and transforms the Highwind into its final form as two long wings unfold from its sides. The final Highwind model is propelled by a single engine, and appears to be an emergency measure for when the ship takes too much damage. Highwind soars the skies as the Meteor crashes into Midgar and the Lifestream wells up to save the Planet.

It is unknown what became of the Highwind afterward, as Cid replaces it with a new airship, the Shera.

The Bridge is located forward of the airship's gondola and can be seen from the outside through a large curved window supported by metal grid-work. The deck contains three work stations, including the pilot controls (located top right and manned by Cid), communications and radar post (located left), and a station for various other stats and controls (located bottom right). The Bridge is accessible via the Machinery Room.

Most of the player party can be conversed with here. Talking to the pilot gives the option to return to the world map where the player can take control of the Highwind.

The Machinery Room links all other areas. The room covers two floors. The ground floor is entered from the Bridge in the bottom-right. If Yuffie is in the party, she resides in the bottom-left of the screen, suffering from motion sickness. On the northern door of the ground floor is the entrance to the Operation Room. On the right of this is the entrance to the Stables. A set of stairs lead to the second floor, which contains another set of stairs out onto the Deck.

The Stables link to the rest of the Highwind via the Machinery Room. The Stables provide suitable accommodation for a chocobo. Accessible via the engine room, the stable contains hay, water and various chocobo feed. If the player boards the Highwind while riding a chocobo, it can be visited here.

The Deck provides access to the airship via a staircase into the Machinery Room. Bugenhagen can be found here during the time he boards the Highwind.

The deck is the first area of the Highwind visited by the party when Tifa first boards. At a number of times the Deck uses a series of ropes and ladders, which can be unfurled to provide access to the ground as well as a mooring to anchor the Highwind while "landed". It is from the Deck the player can descend into Northern Cave.

There is a hidden affection value that determines whom Cloud will go on a date with in Gold Saucer. The value is determined by the dialogue and party member choices made prior to the date. Near the end of the game, the affection value for Tifa determines which version of the "under the Highwind" scene plays.

The following buttons control the Highwind:

Cid's ultimate Limit Break is "Highwind" where missiles (presumably being fired from the Highwind off screen) rain on the party's enemies. It is one of the most powerful Limits in the game.

"Highwind Takes to the Skies"

"Gold Saucer ~ The Highwind Takes to the Skies / X'mas Edit" (from Final Fantasy VII) is a track on the X'mas Collections music from SQUARE ENIX.

On the Way to a Smile -Episode: Denzel- Final Fantasy VII[]

A toy version of the Highwind appears in a scene.

Highwind appears in an Airship Field Music Sequence for the theme, "The Highwind Takes to the Skies".

In Kingdom Hearts, Riku challenges Sora to a race; if Sora wins, he can name their raft what the player wishes. However, if Riku wins, he calls it "Highwind". The name of the raft is used for the name of the Gummi Ship later in the game.

The Highwind appears on the Northern Cave stage in Super Smash Bros. Ultimate.

features Aerith on the empty air strip, as Highwind does not appear in the game.

In Crisis Core -Final Fantasy VII-, the player can see a blimp that resembles the Highwind in Junon's Airport. It can be seen more clearly with a map viewer.

If Cloud talks to Yuffie in the airship she will ask for advice on air sickness and Cloud will respond that having been in SOLDIER, he often traveled in trucks, even if having Cloud back in the party after obtaining the Highwind happens after he got his real memories back. 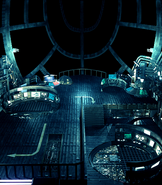 The Bridge of the Highwind as it appears with Shinra on.

Highwind on the World Map. 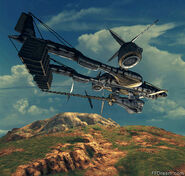 The Highwind moving to pick Cloud and Tifa up.

The Operation Room with clutter on the table.

Highwind docked in an FMV.

Lady Luck in an FMV.

Highwind powering up in an FMV.

Highwind being destroyed in an FMV.

Emergency Highwind in an FMV.

The deck in an FMV.

The bridge in an FMV.