High Jump (ハイジャンプ, Hai Janpu?) is a variation of the normal Jump command, and is essentially a more powerful version. Sometimes High Jump is the main jump ability in a game, rather than an improvement to the regular Jump.

High Jump is a Command Materia that, when used, allows Zack to jump high into the air and come back down seconds later to deal massive damage in a wider vicinity, a step above the Jump Materia. High Jump costs 38 AP to use. It can be created via Materia Fusion by upgrading the Jump Materia.

High Jump is gained at level 35 for Dragoons. It initiates a jump action and the user loses an undetermined, but considerable amount of enmity. The Dragoon then has a chance of hitting with his jump attack. This attack does about normal damage. The Dragoon may perform this action once every three minutes.

When used in combination with Spirit Surge, the Dragoon will lower the enemy's TP by an amount proportional to his damage.

Dragoons gain the trait Jump Mastery, which upgrades their Jump ability to High Jump, at level 74, improving the ability's damage and shortening its animation time.

High Jump is Ignis's Technique and Tactical Art that was first available in Episode Ignis. He leaps into the air and lands upon his target, dealing damage to the surrounding enemies as well. In the battle against the final boss of the episode however, the boss moves away from High Jump's impact site unless stunned.

High Jump is an ability for Nine that requires 8 AP and is available after learning Mobile Strike II. Nine leaps into the air and delivers a powerful strike from above.

This section about an ability in Final Fantasy Agito is empty or needs to be expanded. You can help the Final Fantasy Wiki by expanding it.

Double Jump is a support ability. Selkies have the ability, but Scratch Cards have the chance to give Double Jump to every team mate.

High Jump is Dragoon's default Soul Break which at the expense of one Soul Gauge segment deals ranged damage to one target equal to 210% damage potency of a conventional attack.

High Jump is a passive ability that boosts the damage of Jump attacks. It is learned by Kain, Freya, Nine, Fang, Gilgamesh, and Veritas of the Heavens. It is also provided by equipping the Dragoon Gauntlets accessory or Stoss Spear.

Nine learns High Jump: Power↑, which provides a larger bonus. Cid's Jump Master and Hero's Vow-Wind TMR boost jump, and he will gain an additional boost from Father of the Airship if he equips his TMR. Aranea learns Miss Mercenary at 7* which can be further boosted by awakening. The Dragoon Lance, Kain's Lance and Falma's Flapping Wings TMR boost jump damage.

High jump is a stronger version of jump, and does damage 3 grids away from the player.

In Bravely Default, High Jump is an Acrobatics ability learned by Valkyries at job level 9. The character jumps out of the screen and comes hurtling down in the next turn, dealing three times (or 4.5 times if a spear is equipped) the damage of a normal attack. It costs two additional BP.

In Bravely Second: End Layer, High Jump is the job level 8 command ability for the Valkyrie. The user jumps off the screen and comes hurtling down the next turn to deal three times the damage of a conventional attack. Damage is increased by an additional 50% if a spear is equipped. It costs 2 BP to use. 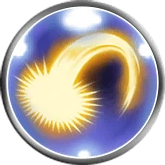