Cid Pollendina: Oh, shut up and help me remodel the Hidden passage page!
Please expand this article into a full one. The following tasks need to be completed:

Hidden passages (隠し通路, Kakushi Tsuuro?) are a recurring feature found in the series, mainly in older installments. Hidden passages are passages impossible to detect unless the player pays close attention to suspicious areas or checks along walls, and usually lead to optional areas that house useful items and equipment. Several hidden areas can only be found via thorough searching.

A hidden passage can be found in Damcyan Castle. Right after arriving in the storehouse, the player should move downward and this will lead to the visible chest containing an Antidote. Going further up after picking up the chest will lead to a Ether.

The Thief job learns an ability called Find Passages that displays all hidden areas on the field.

Final Fantasy VI has hidden passages, but there is no in-game way to find them other than knowing beforehand or with a trial and error method. If the player has a cheat device, a background layer can be disabled to see them being rendered in most cases.

In Godo's house in Wutai, the player can find two hidden passages behind fake walls to find a Magic Shuriken for Yuffie and a Hairpin for Red XIII. Also, a cave on Gaea's Cliff contains a well hidden Ribbon in a room hidden from view.

In the Ice Cavern, Vivi can reveal hidden treasures by blasting away the walls of ice with his fire magic. To find the walls that can be destroyed, an exclamation mark will appear on the field.

The path to Remiem Temple is located in the Calm Lands near the entrance to the Macalania Woods, but can only be accessed by riding a chocobo.

Many locations, such as the Crawlers' Nest and Pso'Xja, have walls that appear solid but can be passed through. It is suspected that the Zilart originally created these illusory walls. Sometimes a person can pass through these secret passages freely. Other passages are one-way only, however.

In some places, it is possible to walk off the map to hidden areas. Walls that prevent passage to hidden areas, known as fools façades, can be removed by examining or damaging them, and other obstructions can be similarly moved or removed.

In Zertinan Caverns, The Hourglass Basin area has a cut-off area in the east that can only be accessed via a hidden passage from the Save Crystal area. It is necessary to use this passage to complete the Catoblepas hunt.

In the Tomb of Raithwall, after defeating both Demon Walls, the player can examine the wall where the optional Demon Wall came out to open a secret passage. The secret passage has a random chance of spawning a treasure chest that contains the Demonsbane sword. In the International Zodiac Job System version the treasure always has a Scathe Mote.

Henne Mines has many off-the-map areas. Some are only shortcuts, but some contain good treasure. For example, one of the off-the-map areas that can be accessed the first time the player enters the mines has a random chance of spawning an Elixir chest.

In the Stilshrine of Miriam, the player can find a hidden passage in the Ward of the Sword-King area; at the junction the path to the left has a wall that will vanish if the player approaches it in a way the camera will attempt to go "inside" the wall. At the end of the hidden section the player finds a treasure containing the Shell Shield. The Rare Game Matriarch Bomb can be found in the area.

The Nabreus Deadlands have a hidden passage through the swamp to enter the area in the north. The player must visit this area as part of the three medallions sidequest, and to fight Roblon.

On the map of Lhusu Mines, a T-junction is shown at the north of Site 6 South; it is, in fact, a crossroads, with a tunnel leading to the Site 6 North area with chests and multiple Pandoras.

In the Necrohol of Nabudis the player can find an off-the-map room in the north of the Hall of Effulgent Light (Salikawood entrance). In the center of the room is a Pandora, but in the corner of the room, a ??? can be found; inspecting it gives a cutscene and access to a Baknamy merchant who sells some of the best equipment, items, spells and technicks.

On the Phon Coast, the player can find a hidden passage between The Vaddu Strand and Limatra Hills. In Vaddu Stand the player can keep running left to find the hidden path under the cliff.

In the Barheim Passage, a mining cart in the south of The Zeviah Span can be dislodged by striking it; it rolls down to make a new path to an otherwise inaccessible area.

In the Pharos, the player can chop down fake walls, called fool's façades, to reveal hidden areas that may lead to waystones or treasures.

In the Subterra only a small part of the map is visible. The player can find more fool's façades to reveal areas behind walls.

On top of the other hidden areas, there are a number of off-the-map areas that can only be accessed by riding a chocobo. On the Ozmone Plain the player can only access the Henne Mines entrance by a chocobo. On the Mosphoran Highwaste the player must use a chocobo to unlock the area where Exodus is fought. The player can even cross Tchita Uplands on a chocobo to enter the Cerobi Steppe before having gone to Archades.

In Palumpolum - Western Promenade, there is a hidden passage leads to a treasure sphere.

Upon entering Focus Tower from the Earth Region, a hidden passage is located right near the entrance. This passage allows the player to reach the steps leading to the first floor faster, acting like a shortcut. If the shortcut is not taken, the player will have to go around the long path to reach the stairs.

After becoming separated from Arthur's party in Maitreya's Tower, Dion finds a hidden door leading him straight to Maitreya.

Hidden passages can be found as early as Castle Lux, and are necessary to use in some cases to progress, for example when bridging between Below Castle Lux and the main castle itself. The hidden passages are typically marked by a discontinuity in tile work or wall, showing that areas are accessible through there.

Towns and dungeons are full of hidden passages. 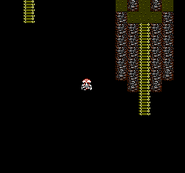 Another type of hidden passages in Final Fantasy III (NES). 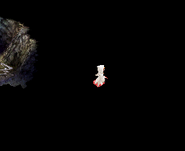 The first secret passage is found in the Underground Waterway in Final Fantasy IV (3D).

This gallery is incomplete and requires Final Fantasy Brave Exvius added. You can help the Final Fantasy Wiki by uploading images.
Recurring elements and topics
Community content is available under CC-BY-SA unless otherwise noted.
Advertisement